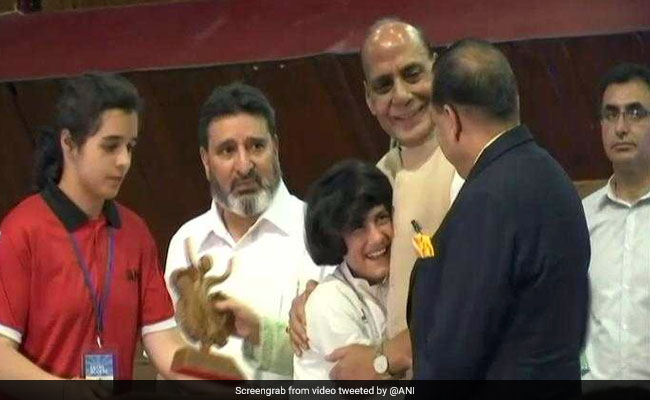 Srinagar: It was a happy picture during the union home minister's two-day visit to Jammu and Kashmir, as nine-year-old Tajamul Islam, the kickboxing champion hugged Rajnath Singh, while receiving a trophy from him.

The little girl asked Mr Singh if she could click a selfie with him and the minister smiled and readily agreed.

Tajamul who lives in Bandipora with her two siblings and parents, won the World Kickboxing Championship in 2016. The Kashmiri wonder girl was in class 2 when she defeated her American rival, in the event held in Italy's Andria. Daughter of a driver who works in a construction company, Tajamul has been a keen sportsperson since she was in nursery class says her parents.

The video was much appreciated on social media. Former chief minister Omar Abdullah tweeted "here's wishing her more success." Others said "we want such happy faces in Kashmir."

We want this type of #Kashmir .. happy faces.. Achieving their goal in life.. spreading happiness and motivation others to achieve their goal of life

She was invited on Thursday, at the Jammu and Kashmir Sports Conclave in Srinagar, where the home minister and Chief Minister Mehbooba Mufti felicitated several sportspersons, mostly youth, from the state.

Promoted
Listen to the latest songs, only on JioSaavn.com
Speaking on the occasion, Mr Singh said sports can change the lives of young people. "Children from Jammu and Kashmir should be given atmosphere and opportunity to develop like in other parts of the country so that stone pelting and violence can stop... and these children can get a chance to grow," the minister said.