A weather official said that the snowfall was going on at most places in the valley when last reports were received. 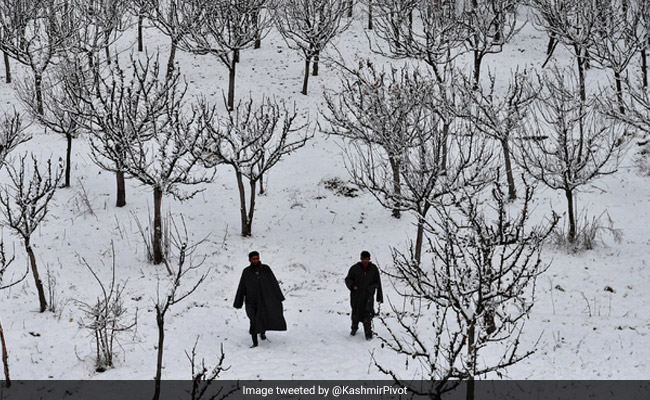 The fresh snowfall has resulted in light temperature going up in the valley: Weather official

Srinagar today received first snowfall of this year as the night temperature across Kashmir improved due to fresh downpour.

"Light to moderate snowfall has been witnessed across Kashmir, including Srinagar city, since early morning," an official of the weather department department said.

He said the snowfall was going on at most places in the valley when last reports were received.

However, flight operations to and fro Srinagar airport were going on as per schedule, an official of the Airport Authority of India (AAI) said.

The fresh snowfall has resulted in light temperature going up in the valley, he said. Srinagar recorded a low of minus 0.8 degrees Celsius last night.

The official said the ski-resort of Gulmarg in north Kashmir recorded the low of minus 8.0 degrees Celsius last night -2.5 degrees up from Sunday.

The night temperature at Pahalgam resort, which also serves as one of the base camps for the annual Amarnath yatra in south Kashmir, settled at a low of minus 3.0 degrees Celsius- over six degrees up from minus 9.4 degrees Celsius on Sunday, he said.

The official said Qazigund- the gateway town to the valley- in south Kashmir recorded a low of minus 1.8 degree Celsius, down a degree from the previous night's minus 0.6 degrees Celsius.

Kokernag town, also in south, recorded a low of minus 2.2 degrees Celsius, while Kupwara, in north, registered the minimum of minus 1.1 degree Celsius, the official said.

Kashmir is currently under the grip of "Chillai-Kalan", the 40-day harshest period of winter when the chances of snowfall are most frequent and maximum and the temperature drops considerably.