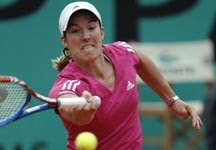 Justine Henin is outside the top 10 and has not played in more than six months, but the Belgian pocket rocket has made a career out of defying the odds and she's ready to do it again at the Australian Open.

Henin stunned the tennis world when made her Grand Slam comeback after retirement in Melbourne last year and went all the way to the final, losing to American powerhouse Serena Williams in three sets.

This time Williams is out injured and although Henin, 28, is coming back from serious injury and currently ranked 13th, she is still strongly favoured by the bookmakers behind compatriot Kim Clijsters.

Entering 2011, Henin had not played a tournament since suffering a career-threatening right elbow injury when losing to Clijsters in the fourth round at Wimbledon in late June.

Speaking at the mixed teams Hopman Cup last week, where she returned to the court with four singles wins and no losses, Henin admitted there were times when she did not think she would be fit to play this year's Australian Open.

Not only that, she is still suffering pain in the elbow, especially during her service motion.

However, there were ominous signs for her Melbourne rivals as she ignored the pain to cruise through her Hopman Cup singles encounters, which included a comprehensive straight-sets win over the resurgent Ana Ivanovic.

Perhaps most worrying for her Australian Open rivals was the ruthless manner in which Henin dismantled in-form American Bethanie Mattek-Sands in the Hopman Cup final.

The aggressive Mattek-Sands had been impressive during the tournament and held two set points in the first set against Henin, only for the Belgian to reel off four points in succession to claim the set.

The American was then up a break in the second set, but was powerless when Henin unleashed a string of trademark winners off both wings to take the last five games and 18 of the last 19 points.

A stunned Mattek-Sands had seen enough to declare Henin on track for a serious tilt at a second Australian Open title, to add to her 2004 win, while Henin admitted the Hopman Cup was just the confidence boost she needed.

The Belgian was also hopeful the elbow injury would not be a major hindrance.

"I have to deal with it," she said. "It's OK, I can play. I am glad with the four matches I had (in Perth)."
Comments
Justine HeninAustralian Open