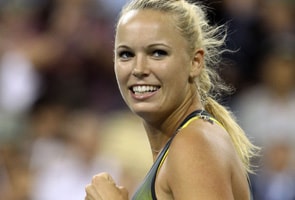 Hong Kong: World number one Caroline Wozniacki shrugged off the growing pressure of not having won a Grand Slam but vowed on Monday that she would "fight to the last point" to win the Australian Open.

The cool-as-ice Dane, who rose to the top of the rankings in October last year, insisted she wasn't worried about missing out in the majors, as tennis was "not about life and death".

Wozniacki, 20, tops the bill at this week's Hong Kong Tennis Classic, which also features five-time Wimbledon champion Venus Williams, as the players gear up for the year's opening Grand Slam in Melbourne from January 17.

"I always go into a tournament and I want to win it," Wozniacki said. "I never give up -- I will fight to the last point. It doesn't matter what the score is.

"I feel like I'm in great shape. I've had two months to practise and I've been working hard... and I'm feeling really good."

Wozniacki, who has gained plaudits for her poise under pressure, has 12 WTA singles titles to her name, hitting number one in the rankings after winning in Beijing in October, but she has yet to win one of the four majors.

"I have a great team around me that keep reminding me that tennis is just a sport. It's not about life and death so I just go out and have fun and enjoy what I do," she said.

"I feel pressure is being put in a spot where you don't feel like you belong. I feel like I belong where I am, I've won six tournaments this year and beaten the top players."

World number two Vera Zvonareva, who returns as captain of Team Russia, enjoyed a career-best season last year and has her sights on Wozniacki's crown in 2011.

Venus Williams, who will play alongside tennis legend John McEnroe for the first time in her career, said she was looking forward to teaming up with sister Serena in the near future after both suffered a string of injuries in 2010.

"Injuries are part of sport and it's just bad luck," she said. "I feel privileged to be here and it took a lot of work to get here. Serena is in very good spirits and hopefully we will reunite as a doubles team soon."
Comments
Caroline WozniackitennisAustralian Open