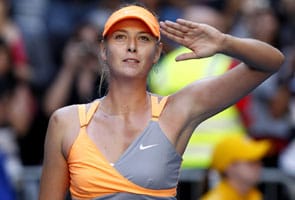 Former champion Maria Sharapova of Russia reached the fourth round of the Australian Open when she beat Germany's Julia Goerges in a three-set thriller 4-6, 6-4, 6-4 on Friday.

Sharapova, who won the title in 2008, was forced to dig deep to see off the unheralded German in 2hr 29mins on the Hisense Arena.

Goerges had outplayed the ex-world number one throughout the first set and pushed her to the limit in the second.

When Sharapova secured two early breaks to start the deciding set, Goerges refused to give in, fighting hard to get one break back and put the pressure on Sharapova.

But the 16th seeded Russian was composed as she served out the match to set up a fourth round clash against either American Venus Williams or another German, Andrea Petkovic.

Sharapova is still looking to recapture the form that took her to three Grand Slam titles and the number one ranking in 2005.

She had a shoulder operation in October 2008 and has struggled to make an impact since then.

"It was an up and down match for me," Sharapova said.

"I didn't concentrate when I had to and I had a lot of let downs, but she played really great tennis today."
Comments
Maria SharapovaAustralian Open 2011