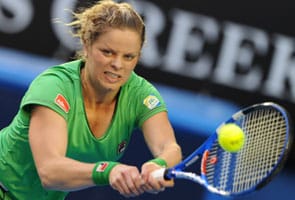 Nadal, the French Open, Wimbledon and US Open champion, was leading 6-0, 5-0 when Brazilian journeyman Marcos Daniel threw in the towel after being troubled by a left knee problem.

Andy Murray went through in similar circumstances when Slovakia's Karol Beck retired with a shoulder problem while trailing 6-3, 6-1, 4-2, during an action-packed day two.

Nadal will play American qualifier Ryan Sweeting next as he targets the "Rafa Slam" -- the first time one man has held all four major titles since Rod Laver in 1969.

The Spaniard, forced out of last year's quarter-final against Murray with a knee injury, said the disconsolate Daniel would be feeling "terrible".

"It's a terrible feeling to pull out of a match with an injury and I wish him all the best and a fast recovery," said Nadal. "If you are feeling bad you should not go on and it's best for the recovery."

In the women's draw, Belgium's Clijsters steamrolled the distraught Safina in just 44 minutes for her fourth whitewash at the tournament, but the first against illustrious opposition.

Injury-hit Safina, a former world number one, was a beaten finalist just two years ago and she was again inconsolable as she left Rod Laver Arena, burying her head in her hands as she faced the media.

"It was very tough," Safina said.

Serbia's Ivanovic, another former number one and the 2008 French Open champion, continued her miserable Grand Slam form with a quick exit at the hands of 49th-ranked Russian Ekaterina Makarova.

The popular brunette fell in round two at last year's Australian and French Opens, before being humbled in her first match at Wimbledon and reaching the US Open's fourth round.

Earlier Murray, last year's runner-up and the world number five, was cruising when Beck gave in to a serving shoulder problem.

"Obviously you'd rather finish the match off without your opponent being hurt," Murray said. "But it does happen quite a lot. So you just have to move on and get yourself ready for the next round."

Murray is searching for Britain's first Grand Slam title since 1936, after being beaten by Federer in last year's final here and the 2008 US Open decider.

The in-form Soderling eased past Starace 6-4, 6-2, 6-2, raising hopes of another rousing run after reaching at least the quarter-finals at the last three Grand Slams.

Elsewhere former world number one Jelena Jankovic, seeded seventh, ended a six-match losing streak as she went through 6-0, 7-6 (7/5) against Alla Kudryavtseva of Russia.