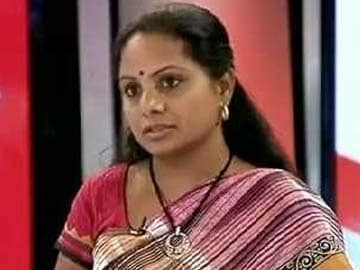 Hyderabad: Police have registered a case against Telangana Rashtra Samithi (TRS) MP and daughter of Telangana Chief Minister K Chandrasekhar Rao, K Kavitha, for her alleged comments on Jammu and Kashmir and Telangana.

The case was registered two days back under Sections 124-A (sedition) and 505 (statements conducing to public mischief) of the Indian Penal Code (IPC) following directions from a local court, said a South Zone police official.

A local court had last week directed police to investigate and file a case against Ms Kavitha, the Nizamabad MP, upon a complaint over alleged remarks attributed to her. The complaint was filed by K Karunasagar, an advocate and the convener of the BJP's city legal cell.

Promoted
Listen to the latest songs, only on JioSaavn.com
The complainant in the petition alleged that Ms Kavitha, in an interview, had made observations that Jammu and Kashmir and Telangana were not part of India earlier.

The police official said legal opinion is being sought on the matter for further action.