Counted among the top centres for the technology industry in the Asia Pacific, Telangana's Hyderabad and Karnataka's Bengaluru have nursed a legendary rivalry over the years. 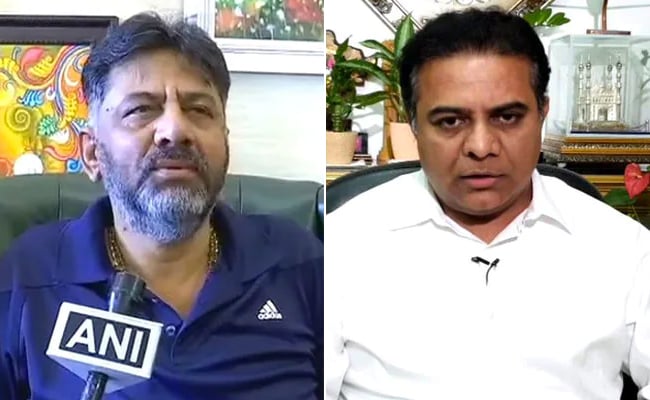 DK Shivakumar (left) and KTR featured in a Twitter exchange over Hyderabad and Bengaluru.

Twitter woke up on Monday to a friendly joust between Telangana Minister KT Rama Rao and Karnataka Congress chief DK Shivakumar over the crown of India's top city for tech entrepreneurs with the divisive controversy surrounding Halal meat and the hijab making a cameo.

Picking up on a reply by Mr Rao, or KTR as he is popularly known, to Housing.com and Khatabook founder Ravish Naresh's complaint about infrastructure in Bengaluru, Mr Shivakumar said the Congress would restore the IT city's glory once it comes to power.

Pack your bags & move to Hyderabad! We have better physical infrastructure & equally good social infrastructure. Our airport is 1 of the best & getting in & out of city is a breeze

.@ktrtrs, my friend, I accept your challenge. By the end of 2023, with Congress back in power in Karnataka, we will restore the glory of Bengaluru as India's best city. https://t.co/HFn8cQIlGS

Dear @DKShivakumar Anna, I don't know much about politics of Karnataka & who will win but challenge accepted????

Let's focus on infra, IT&BT, not on Halal & Hijab https://t.co/efUkIzKemT

BJP-ruled Karnataka, home to IT and startup hub Bengaluru, has been increasingly in the news lately for growing right-wing religious activism that the opposition says has targeted Muslims for everything from what they wear, eat and where they trade.

Christian groups have also come under attack in the state over accusations of forced religious conversion - allegations that have not been backed by data despite questions raised by the opposition and activists.

Last week, in the middle of a row over a call by right-wing groups to ban Muslim traders from temple festivals, Biocon chief Kiran Mazumdar Shaw urged Chief Minister Basavaraj Bommai to "resolve the growing religious divide" in the state, warning that if the tech sector becomes communal it will "destroy" India's global leadership in it.

A rattled BJP accused her of expressing a "politically-coloured opinion".

Counted among the top centres for the technology industry in the Asia Pacific, Telangana's Hyderabad and Karnataka's Bengaluru have nursed a legendary rivalry to draw businesses and talent, offering vast incentives and resources to the sector.