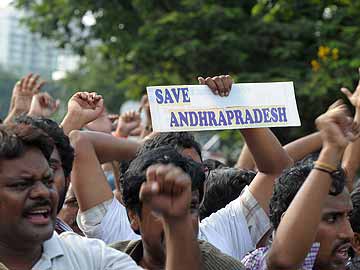 New Delhi: The Supreme Court today referred a bunch of petitions challenging the validity of the Centre's decision to split Andhra Pradesh to a Constitution bench, but refused to stay the creation of Telangana as India's 29th state.

The Top Court, responding to a batch of 18 PILs challenging the formation of the new state, including the one filed yesterday by former Andhra Pradesh chief minister N Kiran Kumar Reddy, also issued notice to the Centre.

Mr Reddy's plea was yesterday put up before a bench headed by Chief Justice P Sathasivam, which agreed to take it up along with a clutch of other petitions on the same theme.

The Top Court had on two occasions in the past declined to entertain petitions challenging Andhra Pradesh's division on the ground that they were "premature" as the Bill had still not been passed by Parliament.

Mr Reddy, a strong advocate of "united" Andhra Pradesh, had, besides stepping down from the chief minister's post on February 19, also relinquished the membership of the state assembly and the Congress party in protest against the passage of the Telangana bill in the Lok Sabha on February 18. He had warned that the bifurcation plan did not portend well for the country, and the party.

Mr Reddy yesterday floated his own party "to restore the heartbeat of every Telugu," but has not named it yet.

Promoted
Listen to the latest songs, only on JioSaavn.com
The Telangana bill was passed by the Rajya Sabha on February 20, and sent to President Pranab Mukherjee for his assent. The Union Home Ministry now says that Telangana will officially be born on June 2.

"There will be problem for the country in the future, mark my words," Mr Reddy, 53, told NDTV in an exclusive interview, adding, "The Congress party has always been saved by Andhra Pradesh. I don't think Telugu people will ever forget this."