Rajinikanth's fans have lined up a series of prayers and welfare activities on his birthday. 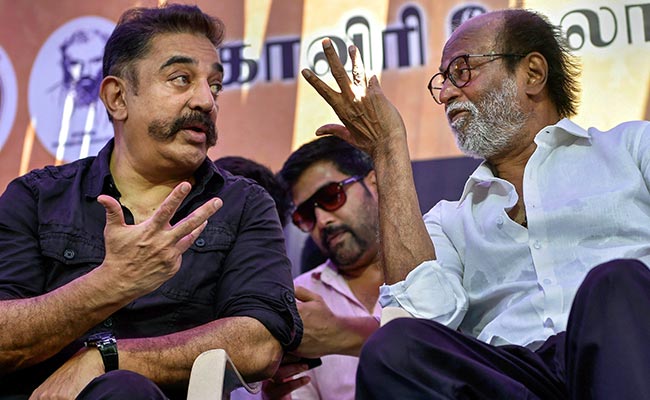 Superstar Rajinikanth turned 68 today. However, the actor with many blockbusters under his belt has urged his fans to keep the celebrations low key this time in the wake of the devastation caused by cyclone Gaja in four coastal districts of Tamil Nadu, sources said.

The actor left for Mumbai last night keeping his tradition of being away from home on his big day, but for thousands of fans in the state it's a day of celebration. Joining them, actor-turned-politician Kamal Haasan tweeted his best wishes.

"My birthday greetings for my friend for many years and fellow student Superstar. Let our friendship and victories continue."

Rajinikanth's fans have lined up a series of prayers and welfare activities today. Early this morning, the women's wing of Rajini Makkal Mandram, honoured bus conductors in Chennai.

Last December, Rajinikanth formally announced his entry into politics and renamed his fan clubs as Rajini Makkal Mandram paving way for individuals outside his fan clubs to take part in the welfare activities.

A cake was cut and shawls were draped around the attendees' shoulders at the function, recalling the superstar's first job as a bus conductor in Karnataka.

Under the 12-12 plan, members from the women's wing organised twelve different initiatives including a campaign against plastic, opening a library at an orphanage and opening savings account for girl children.

The organisation's South Chennai Secretary Gayathri Doraiswami said: "This is an example of how much of good we could do. We want to make every hour a super hour for the one and only superstar and reach out to communities."

The actor's wife Latha Rajinikanth will launch an app and a toll free number as part of her NGO Peace for Children that works for rescuing missing children and child safety.

Some fans led by actor Lawrence offered a puja for Rajinikanth at a Chennai temple.

The superstar is yet to officially launch his political party. On Tuesday Rajinikanth described poll results in the five states as a "setback for the BJP." In a direct fight Congress unseated the BJP in Madhya Pradesh, Rajasthan and Chhattisgarh.

The actor's 2.0, the sequel to Endhiran was released a couple of weeks ago and presently he is busy with "Petta," directed by Karthik Subbaraj. Sun Pictures, producers of the film have also released the film's teaser celebrating Rajinikanth's big day. The film is slated for a Pongal release in January.