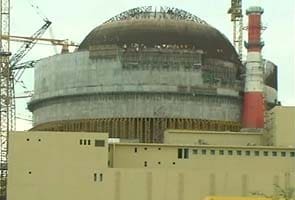 "Two German technicians completed the sealing of the reactor pressure vessel on Friday. Now we are in the process of refixing and rewiring of the other systems located outside the vessel," the official, who did not want to be named, said.

According to him, the sealing of the Russian-built reactor pressure vessel is a major milestone in the project's progress.

The official said the next step in the project would be submitting reports to sectoral regulator Atomic Energy Regulatory Board (AERB). The AERB would in turn give the sanction for heating up of the systems, he said.

The regulator had given the nod to close the pressure vessel on October 20 post the loading of 163 enriched uranium fuel bundles.

According to the official, the machine to close the reactor pressure vessel is of German make and a technical team from that company has to operate the equipment.

Queried about the approximate time of the reactor going critical (starting of fission process), a NPCIL official said that it might not happen during the second week of this month as said earlier.

"AERB has to go through our reports and give its nod for starting the heating up process. Then tests have to be done and upon satisfaction, AERB would give its permission for reactor achieving criticality," he said.

AERB gave its nod to NPCIL to load 163 bundles of enriched uranium fuel in the first reactor in KNPP on September 18 after the operator complied with all the conditions laid down by the regulator in its August 10 sanction order.

After the reactor is fuelled, activities to approach first criticality-starting fission chain reaction, for the first time in a reactor, will be taken up.

Closure of the reactor pressure vessel is the first step. Then the power generation will be gradually scaled up on AERB's permission, based on the results of various studies.

The nuclear power project is an outcome of an Inter-Governmental Agreement between India and the erstwhile Soviet Union in 1988. However, the construction began only in 2001.