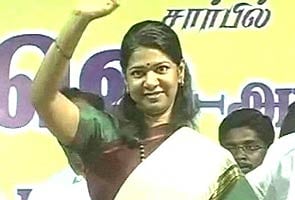 Chennai: The otherwise media savvy DMK Rajya Sabha MP Kanimozhi has been maintaining a low profile ever since she was released from the Tihar Jail on bail in the 2G case. However, on Sunday, Ms Kanimozhi, who is party chief M Karunanidhi's daughter, addressed her first public meeting since her imprisonment, on the outskirts of Chennai.

Ms Kanimozhi's meeting was part of a series of protests organised by the DMK across Tamil Nadu against the recent hike in the electricity tariff, the power cuts and the reversal of many decisions by the Jayalalithaa led AIADMK government.

"The AIADMK government has changed many good schemes that had been introduced by us...hiked the price of milk, bus fare and even electricity charges. We will fight and oppose all these acts," said Kanimozhi.

Last year, Ms Jayalalithaa's party had won the Assembly elections and routed the DMK out of power in Tamil Nadu.

Kanimozhi was arrested in connection with the 2G scam because a firm part-owned by her, Kalaignar TV, allegedly served as the landing place for  a 214-crore bribe for Mr Raja. The money was sent, according to the CBI, by Swan Telecom which had won an out-of-turn telecom license from Mr Raja in 2008. The money was allegedly routed through a maze of companies all associated with or owned by Swan.

Promoted
Listen to the latest songs, only on JioSaavn.com
But Kanimozhi's lawyers say that she was only a shareholder in Kalaignar TV and that she played no role in its management's decisions.  They also say that the money that was paid to Kalaignar TV was a loan that was returned with interest. The CBI says the money was sent back only after the case against Mr Raja began picking up speed.

The DMK MP spent seven months in Delhi's Tihar jail last year before being granted bail by the High Court.