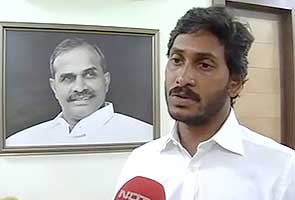 Mr Reddy was arrested in May for alleged corruption.  The CBI case against him said that when his father, YSR Reddy, was Chief Minister, he pressured companies to invest in Mr Reddy's business empire.  YSR died in a helicopter crash in 2009.

Mr Reddy was arrested just before important by-elections were held in Andhra Pradesh - his mother campaigned for him after he was jailed, and their party, the YSR Congress, swept the polls.

The CBI, which opposed Mr Reddy's bail, said that hawala or money laundering transactions by his network of companies is being studied and that at least three more months are needed to scrutinise the financial transactions of his vast business empire.

Promoted
Listen to the latest songs, only on JioSaavn.com
While rejecting Mr Reddy's request today, the Supreme Court said that he can apply for bail after the CBI files a consolidated chargesheet in the case. But with the CBI saying it needs more time to complete its investigation, the politician might have to remain in jail for the next few months.

The CBI is investigating seven companies in connection with alleged money laundering to the tune of Rs 3000 crore. Letters of rogatory have also been sent to six foreign countries as part of the probe.