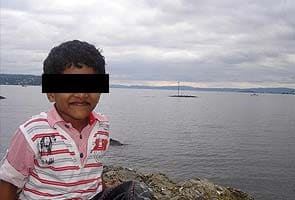 Hyderabad: When Chandrasekhar and Anupama Vallabhaneni threatened to send their seven-year-old son back to India from Norway earlier this year, they were attempting to discipline him. They are now in a jail in Norway.

From available information, it is not clear under what charges the couple has been arrested.

Chandrasekhar works with software giant TCS which had deputed him to Oslo 18 months ago to handle a project. He took his wife and his two sons with him. Then his older son, Sai Sriram, allegedly told his teachers that his parents had reprimanded him harshly for wetting his pants.

In Hyderabad, Chandrasekhar's family says that child welfare authorities took Sai Sriram away for a month, but returned him to his parents' care after medical tests established he had minor behavioural problems because he is hyperactive.

The family returned home in July. But this month, Chandrasekhar returned to Norway, once again for work, and was issued court summons, after which he was arrested on Monday along with Anupama, who had travelled to attend the court hearing with him.

Chandrasekhar's mother and sister say they were informed by a colleague of  his arrest. The Norwegian authorities have not contacted them nor elaborated on the charges against the couple, they allege.

The family wants the Indian government to intervene to help bring the couple home, where their children are being looked after by relatives in Hyderabad.

A few months ago another Indian couple in Norway - Anurup and Sagarika Bhattacharya - were involved in a prolonged custody battle with Norwegian authorities after their two children - Abhigyan, 3, and Aishwarya, 1 - were taken away by the Norwegian Child Welfare Services in May last year.

Promoted
Listen to the latest songs, only on JioSaavn.com
(with PTI inputs)

"We Are Bigger Goondas Than You": Telangana BJP Chief To KCR