The assets were bought with illicit means by the treasury department official, who allegedly demanded bribes to pass bills, the police said. 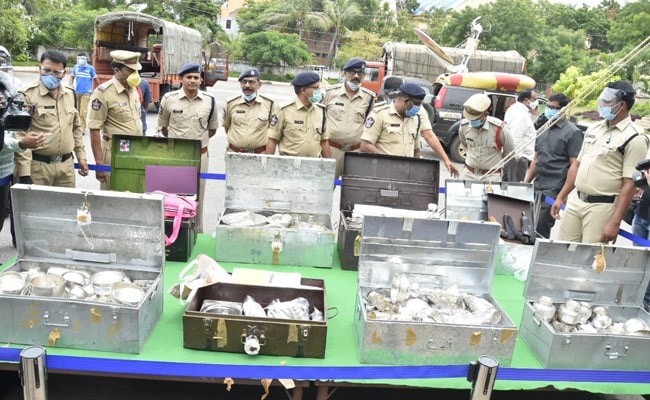 Silver and gold, weighing 84 kg and 2.4 kg respectively, were seized in the raid with other valuables

A horse, luxury vehicles, massive quantities of gold, cash, and weapons, allegedly belonging to a senior assistant of the Andhra Pradesh treasury department, have been seized in a raid conducted by the police today. The assets were bought with illicit means by the treasury department official, who allegedly demanded bribes to pass bills and had parked the movable assets at the residence of his driver's father-in-law, the police said.

The police, acting on a tip-off about hidden weapons and ammunition, raided the residence of Balappa in the state's Anantpur district.

No case has been filed yet naming the official, who is said to have got the job on compassionate grounds in 2006, after his father, a police constable, died while on duty.

Anantpur district police chief Sathya Yesubabu told NDTV that the case will be brought to the attention of state police chief Gautam Sawang, who will then hand it over to the anti-corruption bureau.

Last week, cash worth Rs 1.1 crore, part of a bribe to settle a land dispute, was recovered from Keesara Tehsildar Nagaraju in Telangana.

Investigation into the case revealed that the tehsildar was a repeat offender but had managed to get away every time. He allegedly offered "gifts" to senior officers to keep them happy and to remain on their good side.