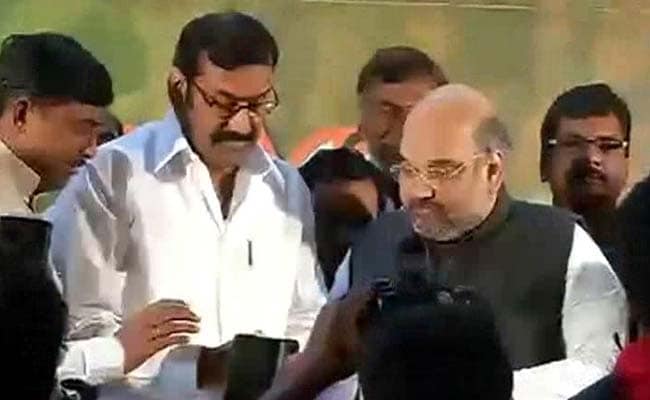 Napoleon (left) joining the BJP in the presence of party chief Amit Shah in Chennai on Sunday.

Chennai: Former Union minister D Napoleon joined the BJP in the presence of party president Amit Shah in Chennai on Sunday, a day after resigning from the DMK.

The actor-turned-politician blamed the DMK leadership for his decision to switch parties.

"The DMK leadership is bad; they made me a minister but never let me function freely, they had tied my hands" he said.

Napolean was a known supporter of MK Alagiri, another former central minister and son of DMK chief M Karunanidhi.

A close associate of Karunanidhi's elder son, M K Alagiri, Napolean is also being seen as a victim of the sibling rivalry between the DMK chief's sons Alagiri and MK Stalin.

Alagiri was dismissed from the DMK this year for anti-party activities and Napolean was reportedly sidelined in the party because of his closeness to him.

Napoleon entered politics as an assistant to his uncle and DMK leader KN Nehru. In 2001, Napoleon became a legislator in the Tamil Nadu assembly from Villivakam constituency.

In 2006, he was defeated in Mylapore constituency in Chennai.

In 2009, Napoleon won the Perambalur Lok Sabha constituency and was made the minister of state for social justice and empowerment in the UPA government.

Napoleon belongs to the Reddiar community. Although he doesn't have a huge fan base or political following, his entry would add some star power to the BJP's Tamil Nadu unit.

Promoted
Listen to the latest songs, only on JioSaavn.com
For the DMK, Napoleon's exit is the second consecutive loss in terms of star power. Recently, actor Khusbu had left the party and joined the Congress.

The BJP chief had addressed his first public meeting in Chennai yesterday; he had set a target of enrolling 60 lakh new members in Tamil Nadu, as part of the party's efforts to strengthen its presence in the state ahead of the 2016 assembly polls.