A video clip shows Lieutenant Governor Bedi confronting A Anbalagan on stage reportedly over the duration of his speech. 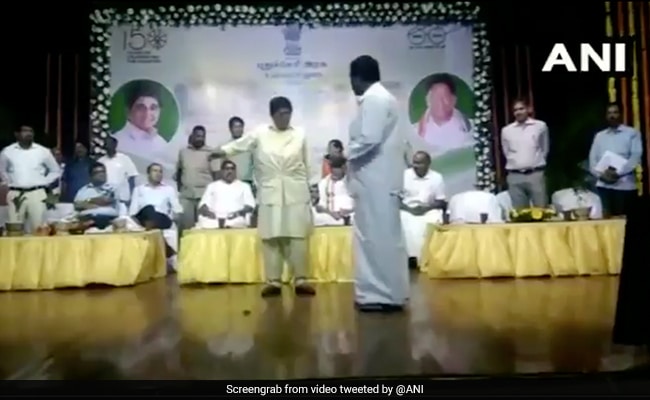 Kiran Bedi can be seen asking AIADMK lawmaker A Anbalagan to leave the stage during an event.

A lawmaker from the AIADMK in Puducherry got into a heated argument with Governor Kiran Bedi on stage during an event on Tuesday.

A video clip shared by news agency ANI shows Lieutenant Governor Bedi confronting A Anbalagan on stage reportedly over the duration of his speech.

"An MLA's Mike had to b turned off when he persistently rejected any req from panel of Hble Ministers to limit his speech. He rejected all appeals. He shouted back. I hav seen him do this earlier too. Event was to give away awards for good work done in making Puducherry ODF (sic)," Kiran Bedi tweeted.

"Please go," Kiran Bedi can be heard telling him with a hand gesture. An agitated Anbalagan snaps back and tells the Lieutenant Governor, "Please go".

The two stand facing each other as other dignitaries are seated on stage, looking on. As the two continue their argument with Lieutenant Governor Bedi repeatedly asking him to leave the stage, one of the dignitaries gets up and intervenes.

#WATCH Verbal spat on stage between Puducherry Governor Kiran Bedi and AIADMK MLA A Anbalagan at a government function. The argument reportedly broke out over duration of MLA's speech pic.twitter.com/bptFSr80nC

Kiran Bedi can be seen showing her watch, indicating the duration of the politician's speech.

The dramatic scenes took place during an event to mark Puducherry's status as a Union Territory free of open defecation.

Speaking later on the spat, Mr Anbalagan told ANI that Ms Bedi does not respect lawmakers at all. "Everything is conducted in a very undemocratic manner. She should change her attitude. She is the main person standing as hurdle in way of development here," he said.

Kiran Bedi, a former IPS officer, has been at loggerheads with the Puducherry government on various issues. Chief Minister V Narayanasamy and the Congress have accused her of delaying clearance to welfare schemes, bypassing the elected government and criticised her weekly field visits.

During an event in May, Kiran Bedi asked Mr Narayanasamy to translate her speech to Tamil. The video of the speech - and the translation - was widely-shared on the internet.