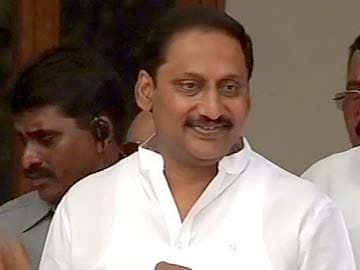 The delegation led by Chief Minister N. Kiran Kumar Reddy called on the prime minister in Delhi and submitted a memorandum over the recent award of the Krishna Water Disputes Tribunal (KWDT) II headed by Brijesh Kumar, a retired judge of the Supreme Court.

The delegation explained to the prime minister how the award by KWDT II will deprive Andhra Pradesh of its right to use surplus water.

The delegation claimed that tribunal tried to distribute even surplus waters altering the parameters that were being adopted for measuring dependability and availability.

It said the verdict had disturbed the central government's general policy on sharing of river waters.

The chief ministers and leaders of all parties said the award would adversely affect the state's interests and sought immediate intervention by the centre.

The delegation apprised Manmohan Singh of the concerns of state's farmers and explained how the award would hit water availability to projects in eight districts.

The tribunal set up in 2004, in its interim decision announced in 2010, distributed water up to average flows of 2,578 Thousand Million Cubic (TMC), notwithstanding the national norm of 75 percent dependability.

Arguing that the decision resulted in inequity in allocations and unsettled many of the settled issues, Andhra Pradesh government challenged it in the Supreme Court, which directed the centre not to publish the award in the official gazette.

The tribunal in its final order pronounced last month did not address the concerns of Andhra Pradesh government, which claimed that the tribunal favoured upper riparian states of Maharashtra and Karnataka.

Under the order Karnataka was allowed to raise the height of Almatti Dam, which Andhra Pradesh alleges will affect its interests.

Promoted
Listen to the latest songs, only on JioSaavn.com
The state government now plans to challenge the final award in the apex court and is also urging the centre to interfere in the case. If not challenged, the tribunal award once published in the official gazette will become an order of the Supreme Court.