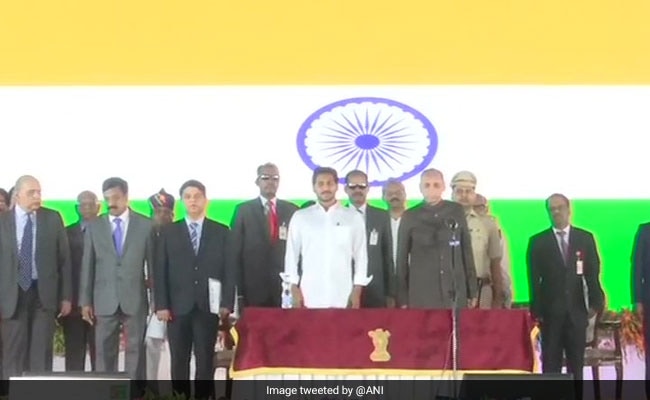 Andhra Pradesh's new 25-member cabinet was sworn-in today, in the presence of Governor ESL Narasimhan and Chief Minister Jagan Mohan Reddy, at a ceremony held near the State Secretariat in Velagapudi. The newly constituted cabinet includes five Deputy Chief Ministers - a first for any state in India - and three women.

The Kamma community, which dominated the previous TDP government headed by Chandrababu Naidu, has been given just the one berth.

Jagan Reddy was sworn-in as Chief Minister on May 30 in a grand ceremony at the IGMC stadium in Vijayawada.

Jagan Reddy, 46, led his party to a huge victory in recently-held state and national elections in the state. The YSR Congress won 151 of 175 seats in the assembly, wiping out N Chandrababu Naidu's Telugu Desam Party (TDP) and 22 of 25 Lok Sabha seats.

The new Chief Minister has made clear his expectations from the new cabinet - he wants Andhra Pradesh to earn the tag of 'best-governed state' within six months to a year. He has also said the cabinet will be reconstituted after a mid-term review of performance, meaning that his new ministers will be expected to hit the ground running.

He is also keen to meet expansive promises made in the run-up to polls. These include hiking pension for senior citizens, Rs 12,500 per year as investment support to each farmer in the state, fee reimbursement for students up to Rs 1.5 lakh per year and more, all of which will cost several thousand crore rupees at a time when the state has a debt burden of Rs 2.97 lakh crore.

Jagan Reddy is hoping that his measures will bring in what he calls "Rajanna Rajyam", an adulatory reference to his father YS Rajasekhara Reddy's era.