After nearly 40 days in jail, Akbaruddin Owaisi walks out 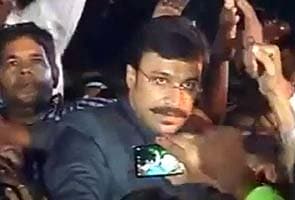 Mr Owaisi, a legislator of the All India Majlis-e-Ittehad-ul Muslimeen, was released from the Adilabad district jail, about 300 km from Hyderabad, after getting bail yesterday. Hundreds of party workers greeted him outside the prison.

Mr Owaisi was booked for allegedly using provocative language against a community at public meetings in Adilabad and Nizamabad districts in December last year. He was arrested on January 8 and faces charges of sedition and waging war against the nation.

Mr Owaisi won bail in both the cases yesterday. A sessions court in Adilabad granted him conditional bail that he will not enter Nirmal town, where he allegedly made a hate speech, and will surrender his passport.

Promoted
Listen to the latest songs, only on JioSaavn.com
In the other case, a magisterial court in Nizamabad town allowed Mr Owaisi bail on the condition that he should cooperate with the investigation.

The Lingayat Angle In The BS Yediyurappa Situation