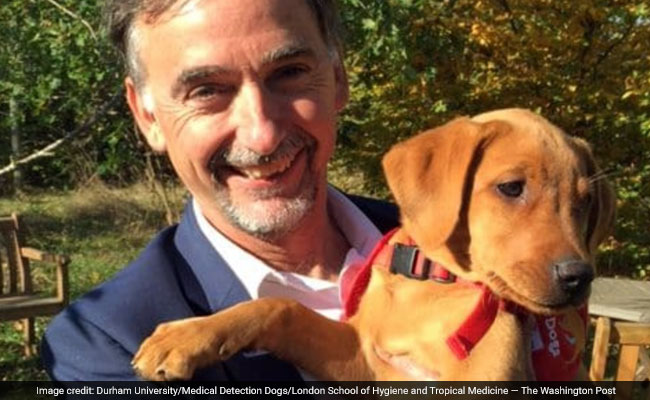 Steven Lindsay has been researching malaria control for decades.

Steven Lindsay, a public health entomologist at Durham University in England, has been researching malaria control for decades. His preferred approach, he says, is to "sit on the boundaries," drumming up ideas that others might not.

So it's perhaps unsurprising that his latest project was inspired by the baggage-claim area at Dulles International Airport. If the beagles there could use their noses to detect explosives or contraband in suitcases, he wondered, could they also be trained to sniff out an intractable disease that kills more than 400,000 people each year?

"I think it is quite extraordinary," said Lindsay, the lead scientist on a study being presented Monday at the annual meeting of the American Society of Tropical Medicine and Hygiene. "We put these socks on African children for 12 hours, take them off, freeze them for 15 months before we start training, and then the dogs can pick up that odor."

Funding for the project came from the Bill and Melinda Gates Foundation, which put out a call for research on malaria tests that are noninvasive, unlike current tests that rely on blood samples. Lindsay and his colleagues focused on asymptomatic carriers because they play a key role in malaria's persistence, acting as hidden reservoirs. But finding them is a challenge because current methods make mass testing impractical.

Lindsay and his colleagues gave nylon socks to nearly 600 children who had been tested for malaria in Gambia, where the disease is endemic, and asked them to wear them overnight. Researchers ended up with 30 socks from asymptomatic malaria carriers and 145 socks from children who tested negative for the disease. Those were then wrapped in foil, frozen and sent to England, where they were stored at the London School of Hygiene and Tropical Medicine while a charity called Medical Detection Dogs trained the pooches.

That malaria alters the volatile compounds that make up a person's odor has been established, and previous research has found that the mosquitoes that spread the disease are more attracted to carriers, including asymptomatic ones.

Dogs, after all, have proved adept at sniffing out cancer, narcotics, human remains and even orca feces. Just what they're smelling when they detect disease isn't clear, said Jennifer Essler, a postdoctoral fellow who works with dogs that sniff for ovarian cancer at the Penn Vet Working Dog Center.

"What we present them with is the blood plasma," Essler said, referring to her own research. "Does that mean they're detecting the body's response to the cancer? Is there something from the cancer in the blood? We're not really sure."

Essler's team is working with scientists from the Monell Chemical Senses Center in Philadelphia to find out what ovarian-cancer-detection dogs smell. That's because the end goal, she said, is not to have dogs screen patients, but to take what's learned from the dogs to create an "electronic nose" that could screen for ovarian cancer.

"For many reasons, you can't deploy dogs to a lot of places," she said. Too, "they're still beings. There are still days when they come in and have a bad day."

But the malaria research provides another strong example of dogs' potential, Essler said: "It's awesome that people are recognizing the capabilities of dogs and how they can be used to help people."

When it comes to malaria, Lindsay said he does not envision squadrons of canines patrolling villages in sub-Saharan Africa. Malaria-detecting electronic noses are also one possible outcome of further research, he said. But in the shorter term, malaria-detection dogs might work at ports of entry in countries that have eliminated the disease and want to keep it out.

There, dogs could identify carriers before they come in, Lindsay said. Training sniffer dogs costs many thousands of dollars, he acknowledged, but "it's cheap compared to the cost of having malaria come back into your community."