Meet Arrokoth, The Most Distant Space Object Ever Seen Up Close

The new designation for the Kuiper Belt object explored by a NASA craft comes from the Powhatan/Algonquian word for "sky." It replaces a nickname that was revealed to have white supremacist connotations. 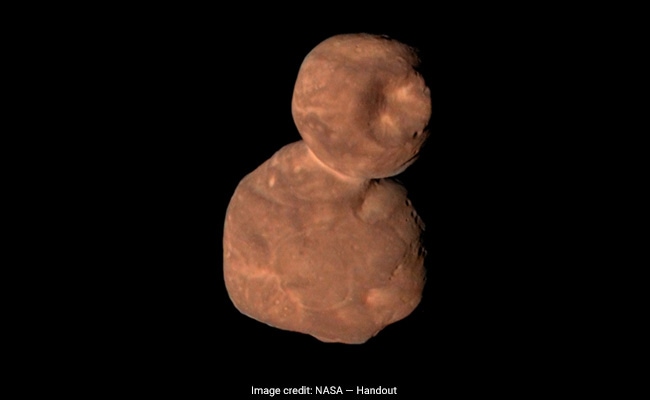 The bundle of ice and rock was discovered using a telescope operated in Maryland. It was studied up close by a spacecraft built in the same state. So when NASA scientists had to choose an official name for the most distant object they had ever explored, they borrowed a word from the original inhabitants of this region: Arrokoth, the Powhatan/Algonquian term for "sky."

"Bestowing the name Arrokoth signifies the strength and endurance of the indigenous Algonquian people of the Chesapeake region," Lori Glaze, the director of NASA's planetary science division, said at a naming ceremony Wednesday. "Their heritage continues to be a guiding light for all who search for meaning and understanding of the origins of the universe and the celestial connection of humanity."

The name also replaces a nickname with an unintended white supremacist connection: "Ultima Thule," a medieval term used to describe the lands beyond the edges of maps. Nazis used it to refer to a mythical homeland of the Aryan people, as was reported in Newsweek, and it remains in use by modern far-right groups.

Arrokoth (pronounced AR-oh-kodh) is a Kuiper Belt object, one of millions of icy bodies that exist beyond the orbit of Neptune. As a frozen fragment of the material that formed the planets, scientists say, it holds clues to the earliest days of the solar system.

It was discovered in 2014 with the Hubble Space Telescope, which is operated by the Space Telescope Science Institute in Baltimore. Viewed through Hubble's lens, it appeared as little more than a faint pixel of light in a sea of black.

But just after midnight on New Year's Day, when NASA's New Horizons spacecraft swooshed past the object, Arrokoth became the most distant object humans have seen up close. Images streamed down to the Johns Hopkins University Applied Physics Laboratory in Laurel, Maryland, revealed a reddish, snowman-shape world.

Alan Stern, the principal investigator for the New Horizons mission, initially defended the Ultima Thule nickname. "Just because some bad guys once liked that term, we're not going to let them hijack it," he told reporters who asked about the Nazi connection shortly after the January flyby.

But new names for space objects have to be approved by the International Astronomical Union, which has strict guidelines for identifying objects in the sky. Ultimately, NASA opted to put forward the name "Arrokoth," which honors the Native American nation whose land the discovery was made on.

The space agency approached artist Phoebe Farris, a professor emeritus at Purdue University who is of Powhatan/Pamunkey heritage, to seek permission from Powhatan elders to use "Arrokoth." The tribe endorsed the choice, and it was accepted by the IAU's Minor Planet Center last week.

Farris presented the new name at the ceremony at NASA headquarters Tuesday.

"Since we are the original inhabitants of what is now called North America, known to us as Turtle Island, it is fitting that 'discoveries' over our skies, on our land and in our waters should be given indigenous names," she told the AFP news service.

New Horizons has sailed past Arrokoth, zooming onward through more unexplored regions of the Kuiper Belt. But scientists are still analyzing the data collected during the brief flyby.

"This is, from a scientific standpoint, just a treasure trove of information about the conditions during the birth of the planets," Stern said at the annual Lunar and Planetary Science conference in Houston this spring. "Everything we've found so far is just the tip of the iceberg."