In the three-minute video, the robot carefully moves across a series of narrow cinder blocks and a balance beam, revealing a degree of body control that many humans would struggle to maintain. 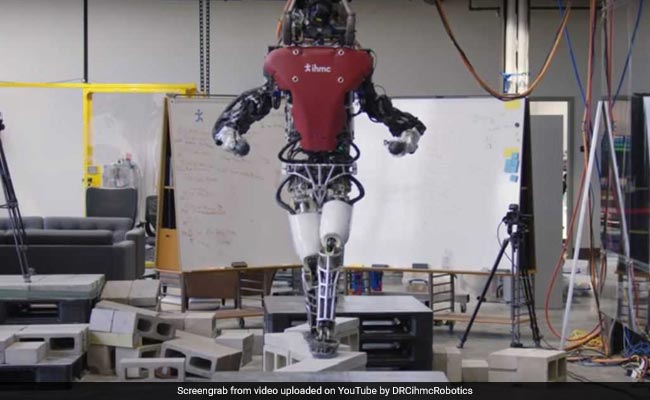 At first glance, a humanoid robot walking between two platforms across several cinder blocks may look like a simple feat.

How many times, after all, have you crossed a shallow creek by hopping from one stone to another or threaded a narrow path while hiking without toppling over?

But the ability to navigate such obstacles by the human body, with its complex joints and natural system for creating balance, is far more difficult to replicate in a machine, especially one that operates autonomously.

To showcase that difficulty, researchers from The Institute for Human & Machine Cognition in Pensacola, Florida, released a video this month showing their efforts to train a bulky, 165-pound humanoid robot to walk across narrow terrain using autonomous planning. In the three-minute video, the robot - a Boston Dynamics-built Atlas model that uses control, perception and planning algorithms created by IHMC Robotics - carefully moves across a series of narrow cinder blocks and a balance beam, revealing a degree of body control that many humans would struggle to maintain.

In a statement that accompanies the video, IHMC Robotics said their robot is "about 50% successful over this type of terrain."

"We plan to increase the rate of success by adding balance using angular momentum and by better considering joint ranges of motion," the statement says.

"Narrow terrain is difficult due to the need to do some 'cross-over' steps, which are tricky due to limited range of motion in the hip joint, and also due to having a small polygon of support when one foot is directly in front of the other," the statement adds.

IHMC Robotic says their robot senses the terrain below using LIDAR, a system that uses a pulsed laser sensor to measure the distance between objects and is a crucial component of many autonomous vehicles' navigation systems. The robot also uses a "path planning algorithm" to trace its route between the beginning of its journey and its goal.

Jerry Pratt, a senior research scientists at IHMC Robotics, said researchers are focused on creating humanoid robots that can walk in a bipedal manner over a variety of terrain. Despite improvements, robots remain unable to reach the same places as people, he said.

"The advantage of being bipedal and humanoid is that your mobility has the potential to be really good," Pratt said. "If you think about everywhere a human go can go it's really incredible. We can climb mountains or go into caves or hike through snow or climb stairs. There aren't many places we can't go."

One of the reasons for that mobility is that the human foot is only about three to four inches wide, Pratt said, whereas a robot on wheels, like a Roomba, for example, is about 13 inches wide. Our relatively small, narrow feet allow us to move around tight obstacles with ease, or step over barriers, all while supporting a higher center of mass that boosts us far off the ground, where we can manipulate the world above (grabbing a branch with a piece of fruit attached, for example).

The versatility provided by the bipedal humanoid form is why researchers want to recreate it in robotic form. At the moment, Pratt said, there aren't any humanoid or legged robots being sold for applications outside of entertainment, advertising and education, but that may change. Pratt said he believes a bipedal humanoid robot would be immediately useful for bomb squads, firefighting units or rescue missions, such as a team combing through a collapsed building or an avalanche. A place that a wheeled robot would struggle to reach -- such as inside a vehicle or a booby-trapped building -- presents an opportunity for a bipedal bot, he said.

Perhaps the most intriguing setting for using bipedal humanoid robots is extraterrestrial. When humans colonize other planets, Pratt said, one scenario involves sending remotely operated robots ahead to develop a habitat suitable for human beings. Being able to send robots that look and move like us, Pratt said, would give scientists a major advantage.

"If you had to design things on the ground for a wheeled robot it would be much more expensive," he added. "We could decrease the required launch mass and have a world that would be designed for our bodies before we even got there."