In Freezing US, Polar Vortex In The Forecast Again. Here's What It Means

There are not one but two polar vortexes in each hemisphere, North and South. 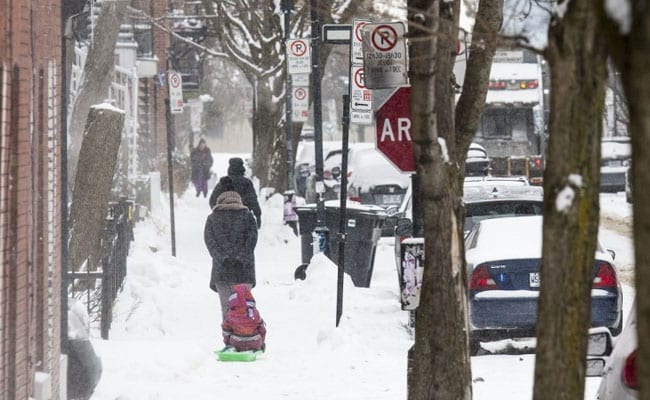 Temperatures are forecast to drop well below zero in the Midwest this week - as cold as around minus-30. The only phenomenon frigid enough to generate that kind of chill is the polar vortex, of which you have heard but might not fully understand.

There are not one but two polar vortexes in each hemisphere, North and South. One exists in the lowest layer of the atmosphere, the troposphere, which is where we live and where the weather happens. The other exists in the second-lowest, called the stratosphere, which is a shroud of thin air that gets warmer at higher altitudes.

If the two polar vortexes line up just right, the Lower 48 can find itself in a very deep freeze.

The low-level vortex in the troposphere is a large mass of brutally cold air and swirling winds coiled around omnipresent polar low pressure. The year-round cold temperature causes air to condense and shrink in size, which creates a vacuum effect that draws air inward.

The tropospheric polar vortex is the one that affects our weather. Most of the time, its harsh conditions are out of reach. But every so often, lobes of it pinch off from the main flow and crash south. This can lash the Lower 48 with piercing shots of cold, intense bouts of storminess and bitter wind chills well below zero. How cold it gets in the Lower 48 depends on how much of the vortex breaks off and how far south it gets.

It is as if the tropospheric polar vortex is a backyard full of dogs, and the jet stream is a fence. The dogs are always trying to escape through gaps in the fence. Occasionally a few of them manage to get out and cause a few days of very cold weather. But once in a while, the entire fence collapses and almost all of the dogs run wild. That is when the big cold-air outbreaks happen.

The stratospheric polar vortex lives above and separate from the troposphere. It is much more compact than its tropospheric cousin. It forms in a similar way but is smoother and maintains a much sharper edge. That is because there is very little mixing with the air below it. With lots of rotational energy, this counterclockwise gyre can speed with little to slow it down.

Most of the time, the stratospheric polar vortex has little impact on our weather. The two layers of the atmosphere remain largely disconnected.

Once in a while, the stratospheric vortex gets disrupted - a sudden stratospheric warming event. When this happens, the vortex can split and affect the weather below it. It can cause kinks in the jet stream so that, instead of flowing west to east, there are a lot of dips and ridges. And the waves in the jet stream can disrupt the lower (tropospheric) polar vortex, break off a lobe and force it south.

We know by now to bundle up when that happens.