Sara Juengst, the lead author on the study, told The Washington Post that she and her colleagues are still in a state of shock. 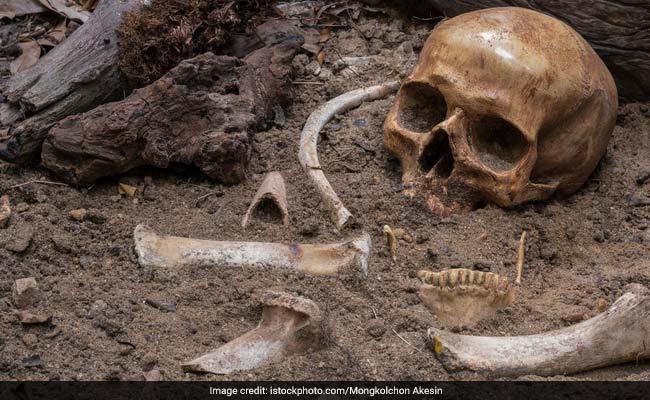 Puzzled by the findings, the archaeology team speculated on why the practice was done. (Representational)

The skull-helmet makers were precise.

They wielded obsidian knives to slice skulls off children's skeletons, scientists believe. Then they reassembled them atop the heads of dead infants, perhaps to protect them on a premature journey to the afterlife.

The discovery of two such skeletons, with helmets made of skulls, stunned archaeologists. In world history replete with such images, they are confident that no other people have fused them in the way this ancient South American culture did more than 2,000 years ago.

Sara Juengst, the lead author on the study, told The Washington Post that she and her colleagues are still in a state of shock.

"Across the Andes, and time, we see head imagery, paintings, and carvings associated with power over enemies, or a connection to ancestors," said Juengst, a bioarchaeologist, and professor at the University of North Carolina at Charlotte. "This is unprecedented."

Juengst and other archaeologists published their findings Nov. 12 in the Latin American Antiquity journal with a decidedly understated title: "Unique Infant Mortuary Ritual at Salango, Ecuador, 100 BC." They unveiled the unique ritualistic burial among the Guangala people, a chiefdom culture deeply intertwined with the Pacific Ocean.

Now a modern tourist destination northwest from Guayaquil, Salango has apparently held secrets of its ancient burials under a fish factory. Burial sites are knotted with orange and pink Spondylus shells, Juengst said, which were highly prized in trading and are evidence the Guangala were skilled divers.

Finding heads or skulls used for ritualistic purposes is routine for researchers throughout the world, Juengst said. But between 2014 and 2016, when the skulls were first uncovered, lead archaeologist and study co-author Richard Lunniss noticed the unusual practice of skulls affixed to the heads of two infants.

The process was exact and skilled, Juengst said, with very few signs of cutting and no metal tools available.

The extensiveness of the covering is why the researchers called them "helmets" rather than "hats," Juengst said. The helmets extend to the back and sides of the head. The infants still had flesh attached to their heads, she said, and it is not clear if they were still living or dead before the skull helmets were affixed.

Puzzled by the findings, the archaeology team speculated on why the practice was done.

There are no clear signs the children were killed for ritual or in any brutal fashion, Juengst said, although it couldn't be ruled out. But the bones of the younger skeletons showed signs of extreme malnutrition or disease, pointing to an early and unfortunate death. The inclusion of carved ancestor figurines may offer some insight into their intent. Perhaps untimely deaths spurred a desire to place them in the lineage of a family after their own chance was snuffed out, Juengst said.

"Maybe they were trying to find a way to protect them in an afterlife they were facing," she said. "We can imagine whoever buried these kids is upset. Grief is universal."

There is already precedent in Inca rituals, she said, of elders establishing dead children as a link to the past and the future. Some of those included marrying children before sacrificing them, she said.

Lunniss, an archaeologist at the Universidad Tecnica de Manabí in Ecuador, is pursuing another theory, she said. The burials are atop an even layer of volcanic ash, which suggests that an eruption and subsequent crop die-off could have prompted the ritual. The community may have tried this new ritual in a bid to regain control of their fortunes, she said, after their other rituals didn't seem to work.

There is still much to learn about the skeletons and skulls.

Juengst said DNA work is ongoing to see whether there is a relationship between the infants and the children whose skulls they wore in death, which could reveal the children, in a way, did not make their next journey without their family close by.