Scientists Went Looking For Meteorites In US Lakes. They Found A Surprise

Mark Hammergren, an astronomer at the Adler, said that researchers "know more about our neighborhood in space than we do about Chicago's backyard." 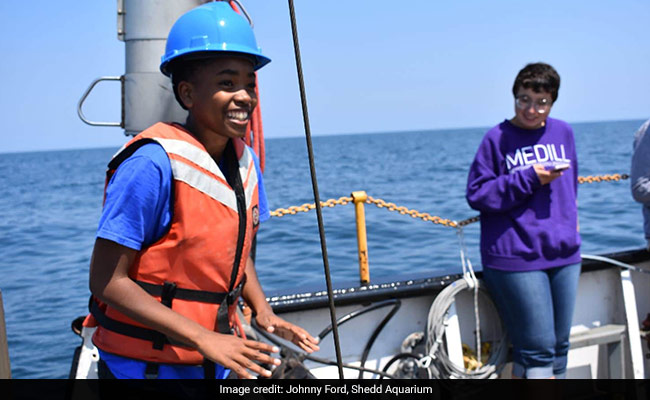 Carmen Jones, 16, a member of the student-led Aquarius Project, works aboard the Neeskay in Lake Michigan

On a sunny July morning, a group of teenagers gathered in a circle aboard a 71-foot research vessel named the Neeskay. The teens, members of a scientific mission called the Aquarius Project, cheered:

The Aquarius Project, run by the students in collaboration with professional researchers, operates out of Chicago's Adler Planetarium with help from the nearby Shedd Aquarium and Field Museum. Together, they are attempting a first in U.S. history: The recovery of meteorite fragments, or space rocks, from the bottom of a lake hundreds of feet deep.

But the underwater fragments are tiny, the size of peas or golf balls. And Lake Michigan covers a poorly explored area of 22,300 square miles.

Mark Hammergren, an astronomer at the Adler, said that researchers "know more about our neighborhood in space than we do about Chicago's backyard." 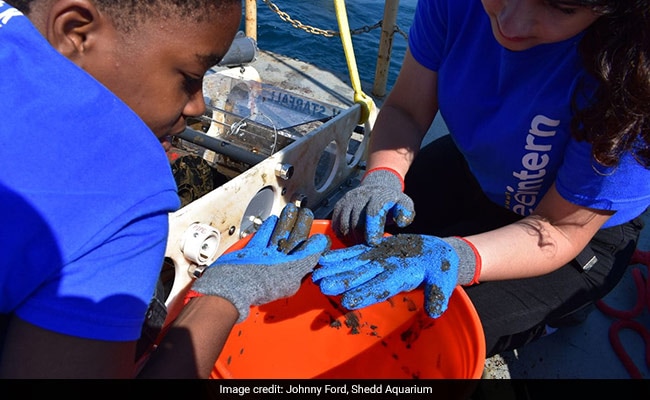 Student scientists sift through mud and debris from the bottom of Lake Michigan in their search for meteorites. Anything inorganic - sand, slag and small rocks - went into five-gallon buckets. Round pebbles sent the youths hollering for Hammergren's attention. With a jeweler's loupe, the astronomer examined the most promising spheres. The pieces that passed this exam went into a plastic container for further study (WP)

Into this blue-green unknown, the Neeskay's crew dropped a submersible, a nest of pneumatic tubing and sensors tucked in a metal box. It sank with a splash. Teens and scientists crowded around a video monitor to watch the descent, which seemed to last for miles rather than 200 feet. The sub landed in a mucky cloud that enveloped the camera. No one in the cramped cabin took a breath until someone joked that he had spotted a megalodon.

The screen cleared. When it did, the team joined a long line of scientists - the discoverers of penicillin, Velcro and Viagra, to name a few - who observed something unexpected. The Aquarius Project went fishing for meteorites. Instead, it found a living carpet of invasive mussels, each the size of a bottle cap, spread as far across a flat lake bed as the camera could show.

The mussels looked like they were everywhere, Hammergren said.

This mussel invasion, Shedd biologist Andrew Caspar said, is the "general story of Lake Michigan." The Aquarius Project team is among the few scientists to directly observe the latest chapter.

In the very early hours of Feb. 6, 2017, a 600-pound space rock hurtled at 38,000 mph into Earth's atmosphere, 60 miles above Wisconsin, according to NASA. Its brief and violent introduction to our planet shattered the meteor, releasing energy equivalent to 10 tons of TNT. 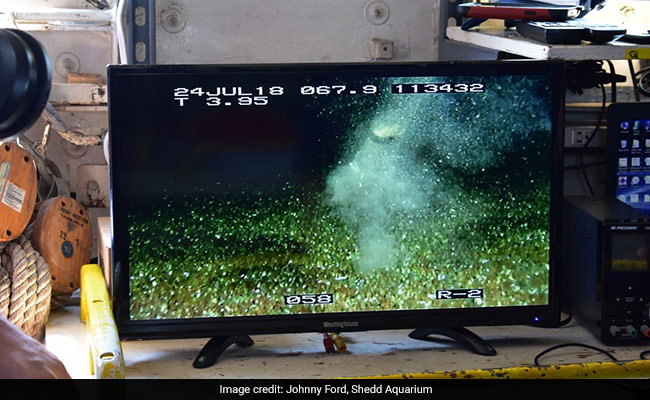 Students watch a video feed of a submersible sampling debris on the bottom of Lake Michigan. The Aquarius Project went fishing for meteorites. Instead, it found a living carpet of invasive mussels, each the size of a bottle cap, spread as far across a flat lake bed as the camera could show (WP)

Houses shook. Low-frequency vibrations traveled so far they registered at an infrasound station in Manitoba, 600 miles away. The meteorite fragments rained into the cold, still depths of Lake Michigan.

Tiny pieces of space rock constantly fall to Earth. A 1996 estimate suggested that meteorites add 16,000 pounds to the planet each year. But because Earth's surface is mostly water and most land is uninhabited, the majority of them go unnoticed. Of all the meteorites that have landed, only 30 have enough video evidence - from cellphones, police dash cams and astronomy sky cameras - to trace the meteor's exact path through the sky.

The Wisconsin meteor was one of those cases. Police dashboard camera video, plus security cameras and other records, helped trace the rock back to the space between Mars and Jupiter.

"It's always nice to find a piece of a meteorite that you have a trajectory for," said William Cooke, who heads NASA's Meteoroid Environment Office in Alabama.

This meteorite could be an ancient scrap of the solar system's building blocks. It is also possible, but less likely, that it was a sliver of the moon or Mars. The Aquarius Project is keen on hauling the fragments, wherever they're from, out of Lake Michigan.

Because NASA and the National Science Foundation rarely issue grants to gather meteorites, amateurs dominate the search. A good specimen is worth about $20 to $50 per gram - literally worth its weight in gold - and an interesting story can inflate the price.

In March 2003, one extraterrestrial "hammer stone" punched through the roof, a rafter and a floor joist of a house in Olympia Fields, Illinois. The rock collected a cocoon of fiberglass insulation and landed in a hamper in the basement. When the homeowner saw the fuzzy pink sphere that perforated his house, he attacked it with a broom. The 2,700-gram meteorite was bought for an undisclosed sum and was donated to the Adler Planetarium, where it is on display.

Yet no one, not even the most die-hard meteorite hunter, had figured out how to pull a meteorite off the bottom of a lake 200 feet below.

After the news about the meteor, Chris Bresky, the teen programs manager at the Adler Planetarium, wanted to find the fragments. "A piece of space, older than our solar system, just plopped down in our lake," he said. "How exciting is that?"

Down the street, others - such as senior research biologist Philip Willink at the Shedd Aquarium and Field Museum meteorite expert Philipp Heck - had the same notion. The Chicago museum triumvirate joined forces for the first time that any of them could recall.

To lift the meteorites, the team decided to exploit the rocks' magnetic properties. About 70 percent of meteorites are rich in iron. Using a sufficiently strong magnet, the team could yank up the tiny pieces.

After a year of design, failure and redesign, the students built a custom sub, the Starfall - an underwater sled built to skim across the bottom of the lake. Its frame is old cutting boards from the Shedd Aquarium kitchen. The students even tried to scavenge magnets from laptop hard drives. "We made a complete mess in our project space - there were computer components and screws everywhere," said Annelise Goldman, a student who is designing a 3-D model of the sled. "But it was so much fun!"

On the Starfall's belly, snow brooms funnel sediment to a row of magnets with 400-pound pull. Wheels attached to the magnets dump the catch into holding bins.

The National Oceanic and Atmospheric Administration's weather radar detected the meteor as it zipped through the sky. Marc Fries, a meteorite expert at Johnson Space Center, used the radar data, along with wind and ballistic trajectories, to map the meteorite landing zone - an area called a strewn field, where the Aquarius Project searched.

The Neeskay towed the Starfall, half-mile at a go, to trawl for space rocks. When the crew and teens hoisted it the back to the surface, grime covered the sled. The students, undeterred by the thick gunk that smelled slightly like blood, scraped the Starfall clean with gloved hands and the gusto of gold prospectors.

"I didn't think there would be so much magnetite," Goldman said of the iron-rich mix of rocks and mud she held.

Anything inorganic - sand, slag and small rocks - went into five-gallon buckets. Round pebbles sent the youths hollering for Hammergren's attention. With a jeweler's loupe, the astronomer examined the most promising spheres. The pieces that passed this exam went into a plastic container for further study.

Neither Hammergren nor Heck has officially confirmed a meteorite. But several large buckets of sand and pebbles still need to be sieved. Heck said he will examine the most likely candidates with microscopes and a chemical technique called Raman spectroscopy. His laboratory tools can analyze meteorite grains as small as 3 nanometers in diameter, he said.

The sub also snagged dozens of the tiny invasive mussels that conquered the lake bed.

These were quagga mussels, a species of European river clam that crossed the Atlantic by hiding in the ballast of container ships. "When you say mussels, you think of them attached to rocks," said recently retired NOAA biologist Thomas Nalepa, who was not involved in the Aquarius Project and has studied mussels in the Great Lakes for decades.

Quagga mussels are unusual clams, at home in soft, fluffy surfaces - exactly what the Aquarius Project team observed in this region of Lake Michigan. (Willink called the bottom sediment "flocculent," meaning loosely clumped, like sheep's wool.) Their slow metabolism and tolerance for cold allows them to thrive at depths other aquatic animals cannot endure.

Every five years between 1995 and 2015, Nalepa and his colleagues sampled a hundred sites in Lake Michigan. Between 2000 and 2005, the quagga mussels' population boomed. Now "there's not a site that we sample that does not have the least some quagga mussels," he said. Based on his work, NOAA estimated there may be as many as 950 trillion quagga mussels in the lake. Quagga mussels and their zebra mussel cousins may cost the United States up to $1 billion each year by clogging pipes and disrupting valuable ecosystems.

Mussels have spared no corner of the Great Lakes environment. Between 2010 and 2015, the mass of quagga mussels in the lakes ballooned 17 percent, Nalepa said, as the older mussels grew larger. The animals have filtered so many nutrients and released so much carbon dioxide they are changing the lake's water chemistry.

The mussels had only recently transformed Lake Michigan. If the sub had filmed this area 40 years ago, "none of this would be here," Willink said. These transplants were combatants in an "invasive species Thunderdome," he said, referring to the gladiatorial arena in the post-apocalyptic 1985 film "Mad Max Beyond Thunderdome."

If quagga mussels are the Thunderdome champions, the losers are small crustaceans called diporeia. Scientists aren't sure why they lost. The shrimplike animals used to be everywhere, a major component of the Great Lakes ecosystem. They feed on floating organic bits; salmon and other fish species, in turn, feed on diporeia. In many places, the crustaceans vanished completely, Nalepa said. The Michigan Department of Natural Resources no longer stocks as much salmon in the lake because there's so little for the fish to eat.

Willink predicted he would see scattered mussels. But barely a patch of sand was visible beneath their tightly packed shells. The Aquarius Project had confirmed the march of the mussels into this unexplored area.

With one discovery in its hat, Aquarius Project will return to Lake Michigan to search for meteorites. The students recently modified the Starfall to cruise faster over the miles of quagga mussels while staying low on the lake. New students will join the program in 2019, picking up where the earlier groups left off. They will learn the art of meteorite fishing, but more important, the way scientists carefully observe into the abyss.

"There are plenty of aliens down there," Willink said. "We're still looking for alien rocks."

(Except for the headline, this story has not been edited by NDTV staff and is published from a syndicated feed.)
Comments
Aquarius ProjectQuagga MusselsGreat Lakes