The accused kept on driving the car with him on the bonnet for nearly one kilometre, before being stopped by other people on the road, the injured cop told news agency PTI. 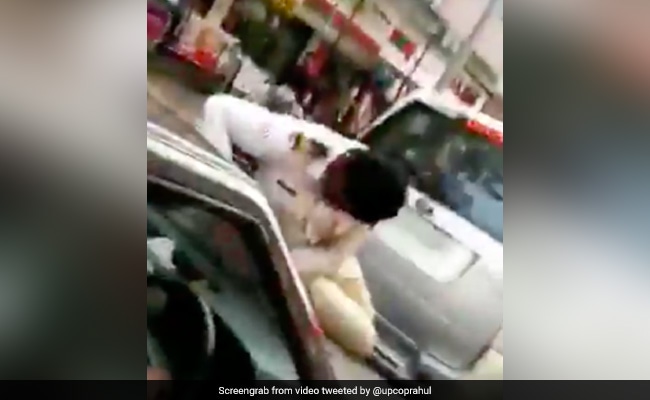 The traffic policeman suffered injuries to his leg in the incident, the police said

A traffic policeman was dragged on the bonnet of a car for almost a kilometre on a busy road in Chinchwad area near Pune after he tried to stop the vehicle as its driver and another occupant were found not wearing face masks amid the pandemic, a police official said on Friday.

The incident occurred on Thursday evening and the traffic constable, Abasaheb Sawant, suffered a leg injury, he said.

The driver, identified as Yuvraj Hanuvate (49), has been arrested, police said.

"Abasaheb Sawant and other traffic police personnel were posted at the Ahimsa Chowk in Chinchwad on Thursday evening. They were collecting fines from people who were found driving or riding without a face mask and for other traffic-related offences," the official from Chinchwad police station said.

"At that time, Mr Sawant and his colleagues found Hanuvate driving the car without a face mask. There was another occupant in the vehicle, who was also without a mask. The policemen signaled Hanuvate to stop the car. However, instead of stopping, the accused increased the speed of the vehicle in an attempt to escape," he said.

"As Mr Sawant was standing in front of the car, he fell on its bonnet and clung on to it. The accused did not stop the car and kept on driving with Abasaheb Sawant on the bonnet for some distance," he added.

Talking to news agency PTI, Mr Sawant said the accused kept on driving the car with him on the bonnet for nearly one kilometre, before being stopped by other people on the road.

"During the incident, I received an injury to my leg as it came under the wheel," he added.

Chinchwad police have charged and arrested Hanuvate, a resident of Pimple Nilakh area, under relevant sections of the Indian Penal Code for "attempt to murder", "assault or criminal force to deter a public servant from discharge of his duty", "voluntarily causing grievous hurt to deter public servant from duty" and relevant sections of the Motor Vehicle Act.

Woman Loses Eyesight After Man Attacks Her In Rape Attempt In Pune: Police