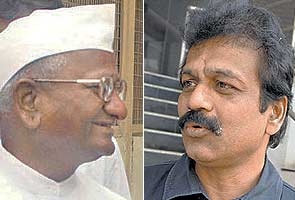 After RTI activists from the city met Hazare in New Delhi, he has promised the activists he would look into the matter. RTI activist Ravindra Barhate met Hazare on Wednesday evening during his ongoing fast and provided him a set of all documental evidence about the alleged Yerawada scam.

Hazare's personal assistant Suresh Pathare confirmed the development to MiD DAY. "Barhate has given the documents and Anna is studying the issue before making any public comment," he said. "I am sure, Anna will take the right step after the Lokpal Bill agitation is over." Barhate returned from Delhi yesterday. He said, "I thought Hazare would be the right person to show these documents as evidence. I have also sent two copies by post to the Prime Minister and Rahul Gandhi. I am also going to file a public interest litigation in the Bombay High Court questioning the ownership of this controversial land."
According to Barhate, the alleged Rs 15,000 crore scam goes back to the 1950s and began from the lands in Yerawada village. The land originally belongs to Chhatrapati Shahu Maharaj of Satara and was later occupied by the Indian military.

In 1950 Murlidhar Lohia claimed his rights to the Collector of Pune and went to the local civil court (civil suit no. 152/51). A compromise was reached in 1953, which means that the suit was never heard on its merits and gave Lohia rights over the royalty collections of the land revenue to the tune of 12 per cent of the total three acres and 36 gunthas of land. The compromise decree was further satisfied through further proceedings in 1956 and 1964. Finally, the court ordered the government to pay Lohia the amount of the revenue royalty as per the compromise decree.

Referring to the available records, Barhate said that in 1988, the then collector Shrinivas Patil, who later became Nationalist Congress Party's member of Parliament from Karad constituency, filed a suit against Lohia, after which again a compromise was made and the possessonary rights of 326 acres were transferred to Mukund Bhawan trust instead of the original 3.26 acres.

Promoted
Listen to the latest songs, only on JioSaavn.com
"The second compromise was effected by twisting facts and figures of the earlier compromise decree," Barhate said. Lohia being a friend of an NCP leader and Shrinivas Patil becoming an MP in 1999 was not mere coincidence, Barhate alleged. He added that the taint had even reached Shahid Balwa, the MD of DB Realty. "Much before the 2G spectrum scam, Balwa applied to the Environment Ministry and others for permissions for IT facility and five-star hotels on the same land," Barhate said. DB Realty could not be immediately contacted for comment.

Special Inspector General of Police Suresh Khopde has opposed the Lokpal Bill saying that it would not be beneficial for democracy and would create 'mahababus'. Khopde was addressing mediapersons yesterday in connection with social activist Anna Hazare's ongoing fast to demand the Lokpal bill. "The Lokpal bill will not erase corruption. The system has to be revamped for this purpose," he said.