Sunny Deol was contesting from Punjab's Gurdaspur, which was the constituency of late Bollywood actor and BJP member Vinod Khanna. 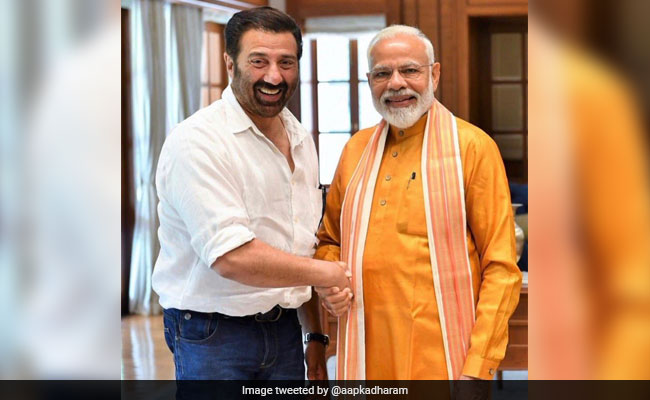 Sunny Deol, the BJP candidate from Gurdaspur, has won the Lok Sabha polls from the seat.

The 62-year-old Bollywood action star took on a new role in New Delhi on April 23, joining the ruling Bharatiya Janata Party (BJP) in a short ceremony in which he professed to have been inspired by Prime Minister Narendra Modi.

Sunny Deol was contesting from Punjab's Gurdaspur, which was the constituency of late Bollywood actor and BJP member Vinod Khanna. Currently, Mr Deol is leading with more than 5,40,000 votes with his rival Congress's Sunil Jakhar trailing with 4,70,000 votes.

Speaking at the event, he said, "Like my father joined Atal Bihari Vajpayee, I have decided to go with Prime Minister Narendra Modi. I want PM Modi for the next five years".

The veteran is the third member of his family to join politics (and the third to join the BJP) after his father Dharmendra, who contested the 2004 Lok Sabha elections from Bikaner in Rajasthan, and his step-mother Hema Malini, who is up for re-election from Mathura in Uttar Pradesh.

Sunny Deol was born in Punjab and made his Bollywood debut in 1988 with "Betaab". A string of hits followed - from "Arjun" to "Tridev" and from "Ghayal" to "Damini", "Ghatak" and "Arjun Pandit" - cementing his position not only as a box office star but also someone who had wide popular appeal.

The combination of his family's political appeal, his Jat background and some of his roles meant that a political career was never an improbable prospect.

In fact, back in 2017 speculation surfaced that the actor was set to make that jump after a photo of him with BJP party member Kailesh Vijayvargiya; the actor also had a BJP shawl around his shoulders.

That was a false alarm though and he moved to end the rumours by tweeting he was neither joining politics nor standing for election.

There was no such speculation (and denial) this time though. The actor joins a long list of Bollywood stars either campaigning for or contesting polls with the BJP in the 2019 elections.

Sunny Deol's last big film was "Mohalla Assi", shot in Prime Minister Narendra Modi's Varanasi. He played a "Kar Sevak" or volunteer participating in the campaign for a Ram temple in Ayodhya.

He was working on a new film - "Blank" - in which he plays Dewan Kumar, the chief of an anti-terrorism squad racing against time to save India from an amnesiac suicide bomber.