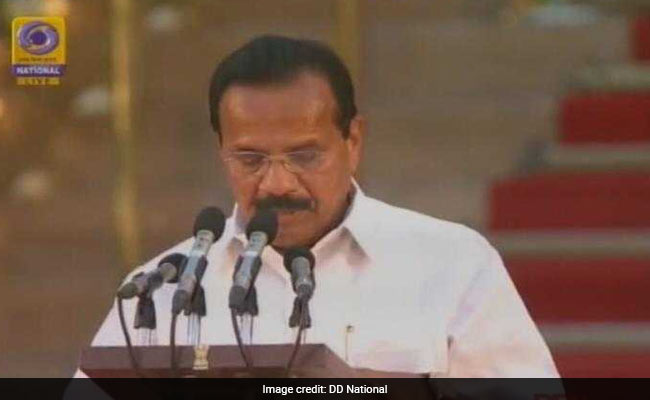 From a student leader associated with the Akhil Bharatiya Vidyarthi Parishad (ABVP) in Karnataka's Udupi to now a union minister in the Prime Minister Narendra Modi-led government for the second time, DV Sadananda Gowda has come a long way.

The lawyer-turned-politician registered his fourth entry to Parliament by defeating Congress heavyweight Krishna Byre Gowda, a member of the HD Kumaraswamy ministry, in the recently-concluded Lok Sabha election.

Born in 1953 in Mandekolu village in Sulya town on the border of Karnataka and Kerala, Gowda did his graduation in science and obtained law degree from Puttur, a small coastal town of Karnataka.

An RSS worker and a vocal ABVP leader during his college days, Mr Gowda started his political career from Jan Sangh, the previous avatar of BJP. It was at these two organisations where he honed his political skills that ultimately helped him scale great heights in his career.

Mr Gowda practised law for a while and became a public prosecutor too but he gave up his law practice to pursue politics. He worked in the BJP in various capacities right from the grass-root level.

He was the Bharatiya Janata Yuva Morcha district president, BJP district vice president, state secretary and finally national secretary.
Mr Gowda took a plunge into the electoral politics by getting elected from Puttur assembly constituency in 1994.

In 2004, he defeated Congress stalwart and former chief minister Veerappa Moily from Mangalore Lok Sabha seat and made his maiden entry to Parliament.

In 2006, he was appointed the BJP state president. His organisational skills led the party to form the first-ever BJP government in south India in 2008. Along side, he became a member of the 15th Lok Sabha in 2009 from Udupi-Chikmagalur constituency.

A turmoil in the scam-hit BJP government in Karnataka culminated in the resignation of the then chief minister BS Yeddyurappa in 2011. Before leaving, Yeddyurappa picked up his loyalist Gowda to lead the state as chief minister.

Thus, Gowa made a comeback to the state politics. After resigning from parliament, Gowda took up the new challenging role. He ceded the Lok Sabha seat to BJP's fire brand leader Shobha Karandlaje, who was elected from Udupi Chikkamagaluru and continues to represent the seat.

In the face of large-scale mining and land scams that tainted the first ever BJP government in the state, Mr Gowda was tasked with an image makeover.

To instill confidence among the masses, Mr Gowda resolved that his office would function in the most transparent manner and would be up for public scrutiny.

However, his measures did not go down well with the state BJP leaders, especially Yeddyurappa, as Mr Gowda began to emerge out of the shadow of the Lingayat strongman and carve out a place of his own.

Mr Yeddyurappa accused him of cutting his support base and not giving due representation to his close aides in the government.
As a result, Gowda''s term as chief minister was marred by infighting in the BJP, which at last resulted in Mr Gowda's resignation. He was then succeeded by low profile leader Jagadish Shettar.

In 2014, Mr Gowda once again headed to the Central level politics. He won the Lok Sabha election from Bengaluru North with a margin of about 2.3 lakh votes against the Congress candidate C Narayanaswamy.

Mr Gowda was initially given the responsibility of Railway ministry in the Modi government. However, the lack of ability to bring about the desired changes in the functioning of Railways reportedly made PM Modi to cut short his stint in the Railways to six months from May 26, 2014 to November 9, 2014.

Mr Gowda was succeeded by Suresh Prabhu as the Railways minister. He then served as the minister for law and justice only for one and half years - from November 2014 to July 2016.

Finally, Mr Gowda was made the minister for statistics and programme implementation to serve from July 2016 to till date. Following the demise of BJP stalwart and union minister Ananth Kumar, Mr Gowda got the additional charge of chemicals and fertilisers.