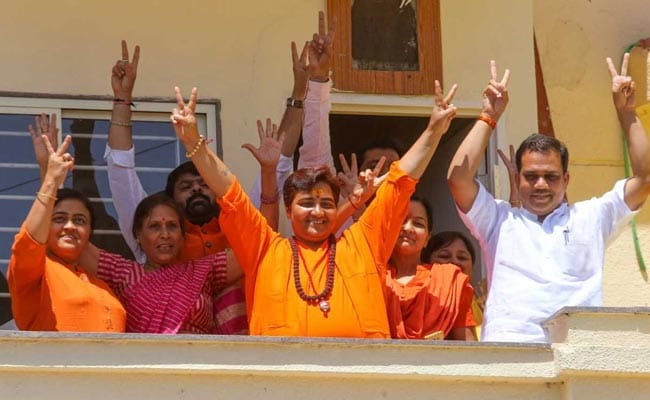 In 2015, Pragya Singh Thakur was given a clean chit by the National Investigation Agency.

Pragya Singh Thakur - the saffron-robed woman long known for her alleged involvement in the Malegaon blasts - has defeated Congress's Digvijaya Singh by a huge margin of 3.6 lakh votes from Bhopal in the Lok Sabha elections.

The 48-year-old, who spent nine years in jail, joined the BJP nearly three years after being cleared of charges under under the stringent Maharashtra Control of Organised Crime Act or MCOCA. But she faces other charges for the series of bombings that killed six people and injured more than 100 in Maharashtra's Malegaon in 2008.

Bhopal has been a BJP bastion for three decades.

BJP chief Amit Shah had said the party fielded the Malagaon blast accused against Digvijaya Singh as he was "creator" of the term "saffron terror" and this time, the people will decide.

Together with the 2007 bombing of the Samjhauta Express, the Malegaon blasts came to be dubbed "saffron terror" during the UPA rule, after investigators arrested several members of right-wing groups.

The investigators said the right-wing groups were upset with the terror attacks on several temples - including the Gujarat's Akshardham temple, Jammu's Raghunath Mandir and Varanasi's Sankat Mochan Mandir.

In her youth, Madhya Pradesh-born Pragya Singh Thakur was an active member of the Rashtriya Swayamsevak Sangh, the ideological mentor of the BJP, and the women's wing of the Vishwa Hindu Parishad.

She was also believed to have links to the Jai Vande Mataram Jan Kalyan Samiti and the Rashtrawadi Shiv Sena, another right-wing Hindu group that counts the construction of the Ram temple in Ayodhya as one of its aims.

Shortly after the 2008 blast, Pragya Singh Thakur was arrested along with fellow members of the right-wing group Abhinav Bharat. Several members of the group, including  Aseemanand, were also linked to the blasts in the Samjhauta Express that killed 68 people, most of whom were Pakistanis. Aseemanand got a clean chit in the case in last month.

In 2015, Pragya Singh Thakur was given a clean chit by the National Investigation Agency, which said there was no evidence against her. But the trial court had other ideas. Pragya Singh Thakur, the court said, must have knowledge about the blasts since the explosives that tore through the market of the town 270 km from Mumbai, were stored in her bike.

Pragya Singh claimed she had sold her bike in 2004, but did not remember to whom. Later, she said the man was Sunil Joshi, an RSS activist who was later murdered. She has also been named as an accused in the murder case.

In May 2016, she was cleared of MCOCA charges but those brought under the Unlawful Activities Prevention Act (UAPA) are yet to be decided. She got bail in April 2017.

In an affidavit soon after her arrest, Pragya Thakur claimed she had been tortured in jail. She said she had been beaten with sticks and belts on her palms, forehand and the soles of her feet and often felt suicidal.

On one occasion she had to be taken to a local hospital in Mumbai. The NIA had denied the accusations.