Political observers say the BJP, which has not appointed another treasurer after Piyush Goyal, depends on him to raise funds for the party. 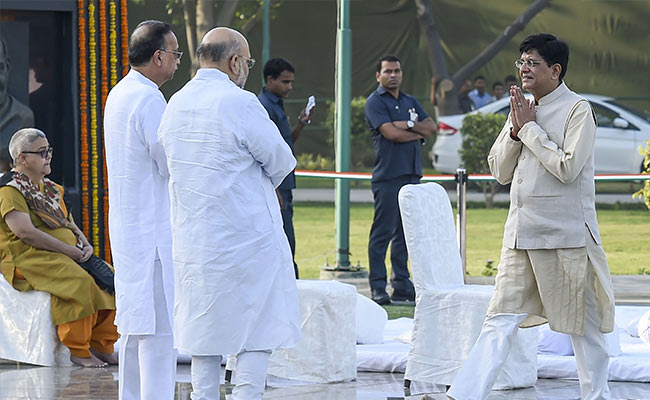 From the BJP's treasurer to its go-to man who has held coal, power, railways and finance portfolios, 54-year-old Piyush Goyal's rise has been phenomenal.

A chartered accountant by profession, Mr Goyal, known for his corporate network developed during his days as an investment banker, is considered to be a key backroom strategist who played a significant role in resource mobilisation of the party.

Considered a blue-eyed boy of both Prime Minister Narendra Modi and BJP president Amit Shah, Mr Goyal was given the finance portfolio in May last year which he held till August, while Arun Jaitley was recuperating from a kidney transplant.

He was again handed over the charges of the Finance Ministry in January this year, when Mr Jaitley fell ill and presented the Interim Budget in Parliament.

Political observers say the Bharatiya Janata Party, which has not appointed another treasurer after Mr Goyal, depends on him to raise funds for the party.

Known to work with a team of around 20 trusted advisors, mostly graduates of top business schools, Mr Goyal has facts, figures, spreadsheets on the activities of his ministry at his disposal at all times. In fact, most of his public engagements through the day are streamed live on Twitter by his team.

As a railway minister, Mr Goyal, a Rajya Sabha member, achieved several firsts -- it was during his tenure the government announced its first bullet train which would run from Mumbai to Ahmedabad, the prime minister's home state, manufactured its first indigenously-built and engine-less high-speed train Vande Bharat Express, commissioned its longest bridge, converted a diesel loco into an electric one for the first time, built its first transport university, its first air-conditioned local train and perhaps its biggest first in last three decades - lowest accident figures.

He is also credited for making transformational changes in India's power sector, including fast tracking of electrification of nearly 18,000 unelectrified villages, roll out of UDAY, a comprehensive reform of the power sector, world's largest LED bulb distribution programme, UJALA for energy efficiency and a massive renewable energy expansion programme.

Mr Goyal, a technology buff, has also taken the initiative of digitising governance which he says brings transparency in the government -- from e-auction of coal blocks to free WiFi across railway stations and live feed for passengers of how railway meals are cooked and packed -- as a minister he has taken strides in using technology to simplify working of the ministries under him.

From an illustrious political family, his father Vedprakash Goyal was former Union minister of Shipping, and National Treasurer of the BJP for over two decades and his mother Chandrakanta Goyal was a three time MLA from Mumbai.