Nawaz Sharif: The Lion of Punjab roars in Pakistan 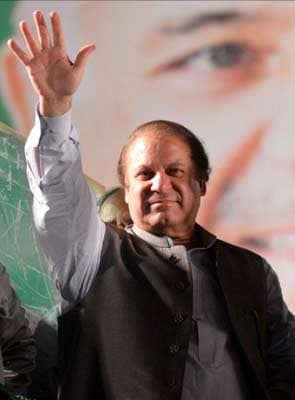 Islamabad: Nawaz Sharif, known as the 'Lion of Punjab' who has promised to restart peace process with India and is set to be elected for a third innings as Pakistan Prime Minister, is seen as someone who can fix the country's bleeding economy but is considered soft on the Taliban.

While votes from Saturday's historic general elections were still being counted, Mr Sharif claimed victory at the headquarters of his centre-right Pakistan Muslim League-N (PML-N).

As per Pakistani TV projections, Mr Sharif's centre-right Pakistan Muslim League-N (PML-N) was leading the race with over a hundred seats.

He managed to swim through cricketer-turned-politician Imran Khan's "tsunami" as his Pakistan Tehreek-e-Insaf (PTI) had a projected win of only 34 seats.

The 63-year-old has promised to transform the country's economy, end corruption in state-owned enterprises, build a motorway from Lahore to Karachi and launch a bullet train.

Mr Sharif's last term as Prime Minister ended in 1999 when then Army Chief Pervez Musharraf carried out a bloodless coup.

In a dramatic fall from grace, Mr Sharif ended up in jail, convicted of hijacking charges for trying to stop a plane carrying Musharraf from landing.

He then went into exile in Saudi Arabia and didn't return to Pakistan until 2007, when he teamed up with the PPP to force Musharraf from office.

Incidentally, his bete-noire Musharraf, who came back from self-imposed exile to contest in the polls, is in jail following a battery of charges against him.

While Mr Sharif has said he does not have any vendetta against him, he has made it clear that treason charges would be slapped on the former military ruler if he comes to power.

During his campaigning, Mr Sharif has emphasised on the need to restart the peace process with India.

"We will have to pick up the thread from where we left in 1999. That was a historic moment and I would like to tread that path...We all agreed that we will have to solve, we will solve all the problems through peaceful means, sitting across the table," Mr Sharif had said.

"We got to bring that time back again and restart our journey from that point," he had said.

Mr Sharif's campaign has focused a lot on the economy. Pakistan ranks 146th out of 186 countries in the United Nations' human development index, a measure of living standards, health and education.

Under the slogan "Strong Economy - Strong Pakistan," Mr Sharif seems to have successfully projected his image as a flag-bearer for private industry and entrepreneurship. Sharif had taken steps to liberalise the economy during his time in office in the 1990s.

Though his economic credentials seems to be fine, he is seen as someone who is soft on the Pakistani Taliban after his calls for talks rather than a military onslaught.

Mr Sharif was born in 1949 into a wealthy family of industrialists in Lahore and was educated privately at English-language schools. He got degree in law from the University of Punjab before joining his father's steel company and eventually entering politics after his family was hit considerably following nationalising of nationalised private industry in the 1970s by then Prime Minister Zulfikar Ali Bhutto.

Under the patronage of former military ruler Zia-ul Haq, Mr Sharif became first finance minister and then chief minister of Punjab - a post he held for five years from 1985 until he was elected prime minister in 1990.

Promoted
Listen to the latest songs, only on JioSaavn.com
He served a three-year term until he was sacked on corruption charges and replaced by his arch-rival Benazir Bhutto.