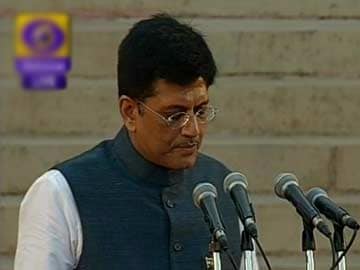 He is the BJP treasurer and considered close to Prime Minister Narendra Modi and finance minister Arun Jaitley.

A rank-holder CA, Mr Goyal is well-versed with economic issues and has been on the Parliamentary Standing Committee on Finance and the Consultative Committee for the Ministry of Defence during his stint as Rajya Sabha MP from Maharashtra.

He is son of senior BJP leader Vedprakash Goyal, who was shipping minister in the Vajpayee government and National Treasurer of the BJP for over two decades.

Goyal-junior heads BJP's Information Communication Campaign Committee that oversees all efforts of the party through internet, mobile and other social media.

Associated with the BJP since 1984, Mr Goyal has held several positions in the party such as Member, National Executive, Bharatiya Janata Yuva Morcha. He has also served as the party's secretary in Mumbai and National Campaign Incharge for the Lok Sabha elections, 1991.

Mr Goyal is an aluminus of Don Bosco High School, Mumbai and is a law graduate from Government Law College, Mumbai and Institute of Chartered Accountants of India, New Delhi.

Promoted
Listen to the latest songs, only on JioSaavn.com
He is also an active member of the Managing Committee of Indian Merchants Chamber and is involved with NGOs in diverse fields such as tribal education and welfare of the physically challenged.