US Newsroom Shooting Suspect: Menacing Loner With An Axe To Grind

Jarrod Ramos is the lone suspect in Thursday's shooting at the Capital Gazette in Annapolis, a local newspaper whose employees were left shocked and heartbroken. 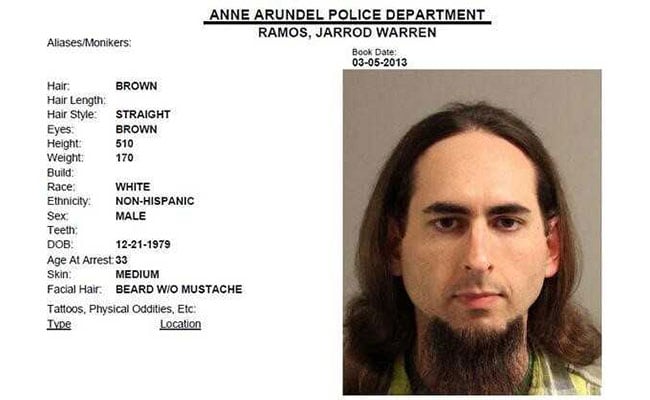 The shooters targeting of the Capital Gazette, a years-long grievance, is well-documented. (Reuters)

Years of threats and hateful posts on social media, a conviction for harassment and a lonely life: investigators were Friday piecing together what drove a 38-year-old suburbanite to murder five people at a community newspaper in Maryland.

Jarrod Ramos is the lone suspect in Thursday's shooting at the Capital Gazette in Annapolis, a local newspaper whose employees were left shocked and heartbroken.

Ordered held without bail for the murder of four journalists and a sales assistant, he was not cooperating with investigators, and stood silently as he appeared via videoconference for the brief court hearing on Friday.

Although they found no written manifesto, police were left in no doubt after searching his home that Ramos had planned a "targeted" attack on the paper -- barricading the back door and searching out his victims with a pump-action shotgun.

"The fellow was there to kill as many people as he could kill," said Chief Timothy Altomare of Anne Arundel County Police.

A resident of the suburban Maryland town of Laurel, halfway between Washington and Baltimore, the onetime federal employee had a running feud with the newspaper stemming from an article that described in detail a criminal harassment case against him.

But what made Ramos snap and barge into the paper's office to commit murder was not clear.

He had a "good childhood" growing up in Severn, Maryland, his aunt Vielka Ramos told the Baltimore Sun, which owns the Gazette.

"He was very intelligent. He would try to communicate with people but he was a loner," she added.

His targeting of the Capital Gazette, a years-long grievance, is well-documented.

In 2011, journalist Eric Hartley had written a chilling account of the harassment case brought against Ramos by a former high school classmate.

In the piece, entitled "Jarrod wants to be your friend," he described how Ramos used Facebook to contact the woman, thanking her "for being the only person ever to say hello or be nice to him in school."

They exchanged messages, but Ramos's posts turned angry and vulgar. He told the woman to kill herself, and contacted her employer and tried to get her fired.

Ultimately Ramos pleaded guilty in court to misdemeanor harassment. He avoided jail but was put on probation.

In 2012 Ramos, who according to the report worked for the US Bureau of Labor Statistics for six years, filed a defamation suit against the paper and journalist Hartley.

The suit also named Thomas Marquardt, the paper's former editor and publisher, as a defendant, according to the Sun.

- 'Leave me alone' -
Ramos went on to make "vague threats" against reporters and the paper, Marquardt told MSNBC, enough so that Gazette staff were shown a photograph of Ramos and told to call 911 if he ever entered the office.

His lawsuit against the Capital Gazette took years to wind its way through the courts. When an appeals judge eventually ruled in the paper's favor in 2015, Ramos escalated his criticism, launching what police described as threatening online comments.

"I'll enjoy seeing @capgaznews cease publication, but it would be nicer to see Hartley and Marquardt cease breathing," he posted on Twitter in 2015.

Other tweets included expletive-laden rants at reporters, and allusions to the 2015 attack on the Charlie Hebdo media offices in Paris.

"Referring to @realDonaldTrump as 'unqualified' @capgaznews could end badly (again)," he tweeted.

The online harassment continued until early 2016, then went dark until just minutes before the shooting, when he wrote: "F--- you, leave me alone."

On Thursday, Ramos's attack began with a shotgun blast through the glass entrance of the newsroom.

Reporters and editors dived under their desks, with one recalling on Twitter the horror of hearing the gunman reload his weapon and resume shooting.

Marquardt, speaking after the murders, recalled how he and the paper were rattled enough by threats Ramos aimed at them in 2013 that he called police.

Marquardt told the Sun he talked with the Gazette's lawyers about filing a restraining order, but decided against it for fear of escalating the situation.

"I remember telling our attorneys, 'This is a guy who is going to come in and shoot us,'" he said.