M Karunanidhi, who was popularly called "Kalaignar" or artiste by many, died yesterday at the age of 94. He took a keen interest in Tamil literature, poetry and drama. He was known for his film scripts - a skill that greatly helped him in his political career. 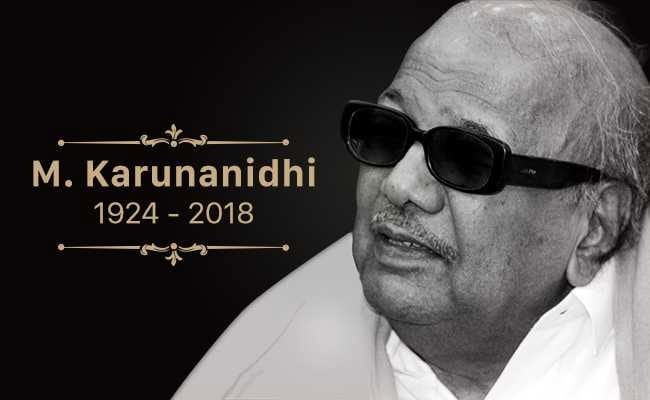 M Karunanidhi, a writer par excellence, began penning scripts for plays as a 20-year old. Over the years, his plays went on to became a vehicle for propagating principles of the Dravidian movement.

A voracious reader and prolific author, Mr Karunanidhi went on to write screenplays and dialogues for over 50 movies, prominent among them being "Parasakthi", starring Sivaji Ganesan in 1952, and scripted the story for several of them.

Age did not wither his pithy prose as Mr Karunanidhi wrote his last script at the age of 90, for a television serial based on the 11th century reformist Hindu saint Ramanuja, who strove for an egalitarian society.

Scripting dialogues for the television series based on the Vaishnavite saint in 2015, Mr Karunanidhi had praised Ramunja for throwing his weight behind the oppressed and backward classes.

Mr Karunanidhi, who was popularly called "Kalaignar" or artiste by many, died yesterday at the age of 94. He took a keen interest in Tamil literature, poetry and drama. He was known for his film scripts - a skill that greatly helped him in his political career. His oratory powers also helped him become a mass leader.

In 1941, when he was in his teens, Mr Karunanidhi ran a handwritten magazine "Manava Nesan".

In 1947, Mr Karunanidhi wrote the screenplay and dialogue for the blockbuster 'Rajakumari', the debut movie of MG Ramachandran or MGR, who later became his arch political rival and founded the AIADMK.

Little did the DMK chief know that his dialogues in 'Parasakthi, which debutant 'Sivaji' Ganesan delivered with panache, would become a big hit and aid in catapulting his political career as well.

In addition to penning dialogues, he had also written stories for movies, including successful films like 'Marudanattu Ilavarasi', 'Mandiri Kumari (both 1950), Tirumbipar (1953) and Arasilangkumari (1961).

A noted Tamil author, Mr Karunanidhi had over 100 works to his credit, including poems and novels.

In 1969, Mr Karunanidhi became a Chief Minister after DMK ideologue CN Annadurai died in office. Three years later, he fell out with MG Ramachandran and shunted him out of the party - leading to the formation of life-long rival All India Anna Dravida Munnetra Kazhagamor AIADMK.

He returned to power again in 1996, after corruption charges caused a major loss of face for Jayalalithaa. Since then, the two parties have been voted in alternately - a tradition that was broken in 2016, when Jayalalithaa was elected for a second straight term.