Kamala Harris is expected to keep up attacks on President Donald Trump and Vice President Mike Pence, just as she has for months as the frontrunner to be Biden's running mate. 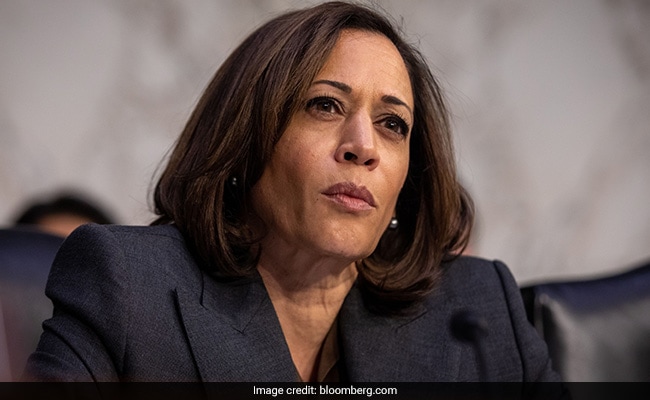 Kamala Harris was elected to the US Senate in 2016.

Kamala Harris made a career of straddling issues and rebranding herself while moving from prosecutor to legislator. Now the Democratic vice presidential nominee will have to rebound from her hard-nosed law enforcement record to become an agent of change in the age of racial justice protests.

She is expected to keep up attacks on President Donald Trump and Vice President Mike Pence, just as she has for months as the frontrunner to be Biden's running mate.

The two Democrats will appear Wednesday in Delaware at their first joint event. A photo by the Biden campaign photographer showed the former vice president telling Harris she had been selected over a video conference, a sign of how the coronavirus pandemic has sidelined even the most important presidential campaign events.

As a presidential candidate last year, Harris drew criticism for her record as both San Francisco district attorney and California attorney general, including her offices' attempts to block bids for freedom from men of color who had been wrongfully convicted of crimes. She said she worked to thread the needle between law-and-order toughness and a protective instinct for those who needed it.

"For better or worse, Kamala has built her brand around being the top cop," said Steve Phillips, a San Francisco fundraiser and host of a podcast called Democracy in Color who backed Harris's first campaign for attorney general.

Republicans reacted swiftly, branding Harris as a part of a "left-wing" mob they say "controls" Biden's campaign. The Trump campaign issued an attack ad within an hour of the announcement and adopted the nickname "Phony Kamala" to go with their nickname of "Sleepy Joe" Biden.

Harris dropped out of the presidential race in December, before the first primary elections and endorsed Biden in March.

If elected, Harris will have the infrastructure and fund-raising heft to have a head-start for a future presidential campaign, whether Biden seeks a second term at 82 or not.

Her enthusiastic embrace of police reform in the months since protests sparked by the death of George Floyd in police custody, including co-authoring a bill in the Senate to ban police chokeholds and other take other steps to rein in law enforcement, may have helped inoculate the Biden campaign against criticism of her prosecutorial record, some strategists say.

"Has Kamala Harris been on the right side of criminal-justice reform throughout her career? Absolutely not," said Terrance Woodbury, a Democratic pollster at Hit Strategies in Washington. "But I think her experience, the combination of things she has gotten right and gotten wrong, make her a tremendous asset to a Biden administration on what will be the number one issue for his most loyal voters."

Harris is the child of immigrants. Her father came from Jamaica and her mother from India, making Harris the first Black woman and first Asian-American to run on a major-party presidential ticket. She will be charged with strengthening enthusiasm for Biden among Black voters and women, both key demographics for any Democratic candidate.

"She's not the traditional African-American candidate," said Fernando Guerrra, a pollster and political science professor at Loyola Marymount University in Los Angeles. "Her whole political career is based on being a crossover candidate. It makes her more appealing to non-African Americans, and that's been her key to success."

Harris first won elected office by portraying the incumbent San Francisco district attorney as "soft on crime," before later branding herself in the Democratic presidential primary as a "progressive prosecutor." She was a death penalty opponent who wound up challenging a ruling that could have ended capital punishment in California as the state's attorney general. She has said she wanted to reform the system from the inside.

"I made a very conscious decision to become a prosecutor," Harris said during a June panel discussion on police reform after Floyd's death. "Because I said, 'Why do we have to be only on the outside, trying to knock down the doors to change the system?'"

Forbes estimates her wealth with her husband Douglas Emhoff at $6 million, with assets that include homes in Washington, San Francisco and Los Angeles worth about $5.8 million before mortgages. They also have retirement accounts worth at least $1.4 million, according to Forbes, and accounts connected with law firms where Emhoff has worked that are worth at least $1 million.

She has sometimes also been tough on Wall Street and the financial sector. She is known, among other things, for a settlement with banks in the aftermath of the 2008-2009 financial crisis in which she held out for tougher terms.

"Kamala comes from the school of thought that government must save Wall Street from itself," said Eleni Kounalakis, the Democratic lieutenant governor of California, an early backer of Harris's presidential campaign. "I know she values competition and entrepreneurship, and I know she will also hold big corporations accountable."

Harris was elected district attorney of San Francisco in 2003 and served until 2011, when she became California attorney general. As San Francisco's top prosecutor, she raised the office's conviction rate from 50% when she took over to 76% by 2009. She also lost some Black support by threatening parents of chronically truant children with prosecution and jail time.

As attorney general, Harris supervised California's litigation over bank mortgage policies and held out in multistate settlement negotiations with Bank of America Corp., Citigroup Inc. and other lenders to force the banks to raise their offers. Initial offers of $2 billion to $4 billion in relief for California homeowners grew to more than $20 billion, as Harris also sought relief on behalf of the state's big pension funds for misrepresentation in the sale of mortgage-backed securities.

She was elected to the U.S. Senate in 2016, defeating Democratic Representative Loretta Sanchez for the seat vacated by retiring Senator Barbara Boxer.