BS Yeddyurappa: From Farmer To Clerk To Chief Minister

Bookanakere Siddalingappa Yeddyurappa had been projected as the BJP's face, a rare move for a party that keeps Narendra Modi in the forefront. 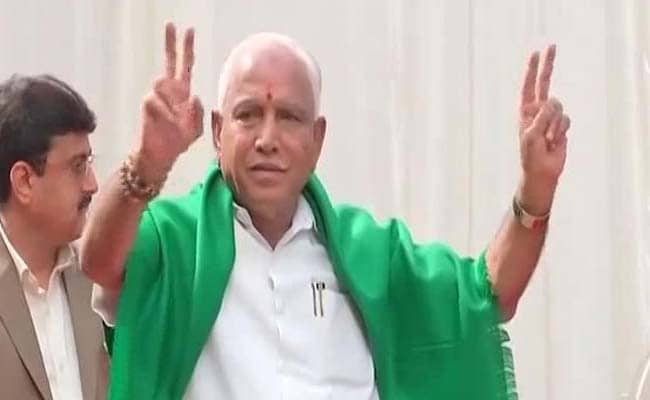 Congress-JDS alleges that Mr Yeddyurappa and his party have already launched "operation Lotus".

Bookanakere Siddalingappa Yeddyurappa knows the value of drama and hype. He plans his moments, seemingly dictated both by stellar considerations and by an uncanny ability to grab attention, whatever he does. But as he was sworn in for the third time as chief minister, there was no big splash in a stadium, as he had wanted. The oath ceremony was low-key, as reportedly requested by Governor, amid questions about how the BJP would make up the numbers it needed for a full majority.

The 75-year-old had been projected as the BJP's face long before the elections -- a rare move for a party that contests keeping Narendra Modi in the forefront. Even during the crucial elections in Uttar Pradesh, that formula was applied and Yogi Adityanath was named as the Chief Minister only after the party's sweeping victory.

One of the tallest Lingayat leaders in a state where the BJP never had a presence, Mr Yeddyurappa and his core group had been instrumental in crafting a victory for the BJP in 2008. It was the party's first victory in south India.

But within three years, corruption charges against him forced Mr Yeddyurappa to step down. There was speculation of back-stabbing from some in his inner circle, including mining baron Reddy brothers and their aides.

By 2013, Mr Yeddyurappa quit the BJP to form his own party -- a move that cost the BJP the assembly election that year.Months after the Congress government of Siddaramaiah came to power, Mr Yeddyurappa headed home -- to BJP.

This time, he is back, his old aides, the Reddy brothers, by his side - Gali Janardhana Reddy, the main accused in a mining scam, and Gali Somasekhara Reddy and Gali Karunakara Reddy, both elected as BJP lawmakers from constituencies inthe iron-ore mining district of Ballary.

BS Yeddyurappa was born on February 27, 1943, to Siddalingappa and Puttathayamma in Bookanakere in Mandya district of Karnataka. He holds a bachelor of arts degree from Bangalore and has been a farmer, a clerk and has run a hardware shop. Somewhere along the way he joined the RSS. His official website says he was 15 when he joined the sangh.

Mr Yeddyurappa's political career began in Shikaripura, which would later send him to the Karnataka assembly six times. It began at the taluk level of the Jansangh and he assiduously worked his way up, even being jailed during Emergency.

From the RSS came lessons in organisation and resource management. The political acumen was innate. He would soon become the leader of the poor and hapless, launching several movements to bring attention to the problems of farmers and bonded labourers.

Over the years came stints as BJP state president and Leader of Opposition in the state assembly.

Mr Yeddyurappa's first headline-making moment was shared - he and Janata Dal (S) leader HD Kumaraswamy brought down the Dharam Singh government of the Congress in 2006. CM Dharam Singh had been indicted, ironically, in a mining scam by the state Lokayukta. A BJP-JD(S) pact was sown - they would head government in turn for 20 months each. So Mr Kumarswamy became CM and Mr Yeddyurappa, Deputy CM. When it was time to swap, the JD-S reneged on the deal and the BJP walked out of the government leading to President's Rule.

The two parties then patched up in an uneasy truce and Mr Yeddyurappa became Chief Minister in November 2007. For seven days. The truce with the JD(S) collapsed over ministries and Mr Yeddyurappa resigned. Another stint of President's Rule followed.

In May 2008, after Assembly elections in the state, Mr Yeddyurappa was sworn in as Chief Minister at the helm of the first ever BJP government in south India.

Promoted
Listen to the latest songs, only on JioSaavn.com
The stint was not without its hiccups, not the least several revolts, including the one by the powerful Reddy brothers of Bellary. But the bigger challenge came in late 2010 when allegations of corruption began to surface. On July 31, 2011, Mr Yeddyurappa walked in the rain to the Raj Bhawan and resigned.

This time, the only possible cloud in Mr Yeddyurappa's horizon is the question of numbers. Just short of the half-way mark, he can't fully celebrate until he has proved that he has the numbers. The Congress-JDS alleges that Mr Yeddyurappa and his party have already launched "operation Lotus" to coax their lawmakers.