Residents said authorities in Patna have failed to pump out flood waters from colonies and apartments even after the rain stopped six days ago.

Officials said they hoped to pump out the water in most areas of Patna by the weekend.

More than 400 people are being treated for dengue in Patna, parts of which remained flooded for the eighth day on Saturday following heavy rain last week, as floating animal carcasses and garbage spouted concerns of spreading disease in Bihar's capital city, home to about 30 lakh residents.

Pockets of the city have been under water for over a week and drains polluted several waterlogged areas. The nightmare has been blamed on malfunctioning pumps by authorities, who now say they home to pump out most of inundated parts by this weekend.

Hundreds of people staged protests against the state government for its handling of the crisis.

They said that the Patna Municipal Corporation and other government agencies have failed to pump out the flood waters from the colonies and apartments even after the rains stopped six days ago. 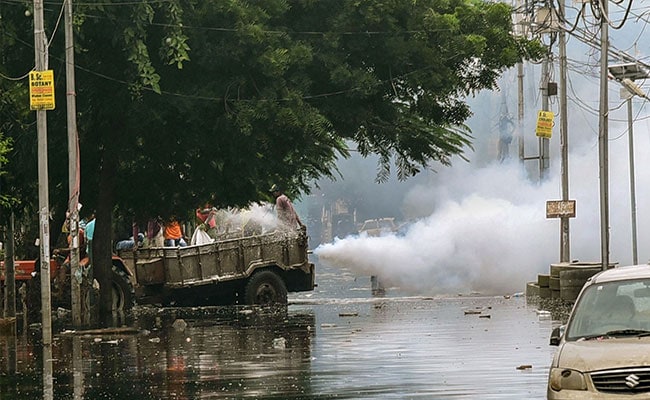 Authorities in Patna launched a fumigation drive to counter the mosquito-borne diseases from spreading.

Police officials tried to pacify the protesters and requested them to end the road blockade.

In the last three days, people from the waterlogged areas have staged protests at over a dozen places in the city. The demonstrations have punctured claims of top government officials about the situation showing signs of improvement.

According to government officials, the worst waterlogged areas of Rajendra Nagar, Kankarbagh and Kadamkuan are yet to get any respite and the accumulated water continues to be at the three to four feet.

Officials have also expressed concern at the choked sewage and drainage system that is yet to be repaired.

Adding to the ordeal of the residents, prices of daily essentials like fruits and vegetables have gone up in the last four days.

The number of deaths in Bihar after heavy monsoon rains has reached 73.

More Than 650 Dengue Cases Reported In Patna This Year, 250 In Last Week