Police have also seized designs and packaging material used for making the vials, cash worth Rs 2 crore and four cars, according to Punjab DGP. 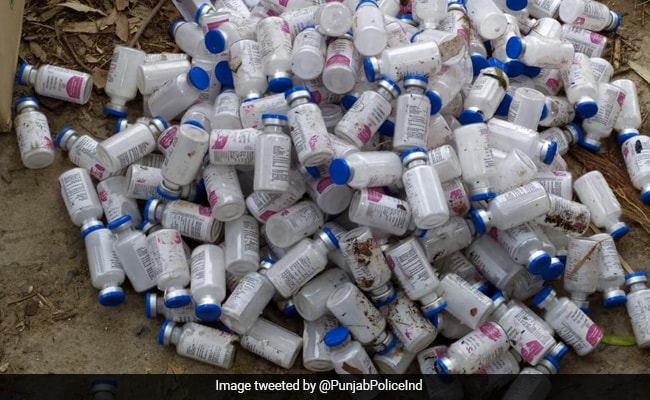 An SIT was formed after 3,000 vials, including 621 of Remdesivir, were recovered in Punjab on May 6.

Punjab police on Friday said that they have busted an interstate gang producing fake Remdesivir injections with the arrest of six persons.

The arrested accused have been identified as Mohammad Shahwar, Arshad Khan and Mohammad Arshad from Uttar Pradesh; Pradeep Saroha from Haryana; and Shah Nazar and Shah Alam from Mohali in Punjab, they said.

A Special Investigation Team (SIT) headed by Superintendent of Police (SP) Ankur Gupta was constituted after 3,000 vials, including 621 of Remdesivir and 1,456 of Cefoperazone and 849 unlabelled ones, were recovered from Bhakra Canal at village Salempur and Balsanda in Rupnagar on May 6.

An FIR was registered under relevant sections of the Indian Penal Code (IPC), the Trademark Act, the Essential Commodities Act, the Epidemic Diseases Act, and the Drugs and Cosmetic Act at Chamkaur Sahib Police Station.

The SIT traced the marketing address of Nautwins Pharmaceuticals written on the recovered medicines, the DGP said, adding that its owner was quizzed.

Following the leads, some places in Delhi, Panipat and Ambala were raided to find the prime accused, Shah Nazar.

Investigation is on to ascertain their area of operations in other states, the DGP said, adding samples recovered have been sent to CDSCO (central drugs laboratory), Kolkata, for forensic examination.