Yes, We Care About Shaktiman, The Horse. That's Not Enough.

Horses are friendly and wonderful animals. People have for years written about their loyalty, amazing memories and good sense - from our Chetak to Black Beauty to more recently the movie War Horse. The country today is distressed over what has happened to Shaktiman, a police horse. The problem with our society is that we have a habit of reacting to situations instead of responding with long-term solutions. The uproar over Shaktiman's issue will die down soon and we will forget and move on. We need to realise that tweeting over one incident will not solve the problem. A larger solution is required. We need to instil a sense of love and compassion for animals in our society - one that is latent in India and needs to be awakened - and also ensure that the law enforcement agencies are trained and respond to animal cruelty effectively.

As India strongly moves forward to stand amongst the superpowers of the world, our moral duty towards our most vulnerable citizens, the animals, must not take a back seat. Violence towards people and animals are inextricably linked. People who abuse animals in their childhood often end up targeting people when they are older. Cruelty to animals in children can be a warning sign of future violent behaviour. Hence, it is of prime importance to address this issue. There are hundreds of examples to show the deep connect between animal abuse and human violence. Mass murderer Jeffrey Dahmer used to cut off the heads of cats and dogs impaling them on sticks. Similarly, Albert De Salvo ("The Boston Strangler"), trapped dogs and cats in crates and shot them through the boxes.

The Macdonald Triad theory (as proposed by renowned psychiatrist JM MacDonald) links cruelty to animals, obsession with fire setting and bed-wetting past a certain age to violent behaviour, particularly homicidal behaviour and sexually predatory behaviour. As a child, serial killer and rapist Ted Bundy - who was convicted of two murders but was suspected of actually killing more than 40 women -  witnessed his father's violence towards animals and he himself later tortured animals. Even in the fictional world of Harry Potter, we see how the ruthless villain and mass-murderer, Voldemort, exhibited tendencies of animal torture in his childhood. In renowned humanitarian Dr. Albert Schweitzer's words, "Anyone who has accustomed himself to regard the life of any living creature as worthless is in danger of arriving also at the idea of worthless human lives."

Abusers target the powerless - crimes against animals, spouses, and children often go hand-in-hand. Children who abuse animals may be repeating a lesson learned at home; like their parents, they are reacting to anger or frustration with violence. Their violence is directed at the only individual in the family who is more vulnerable than they are: an animal. 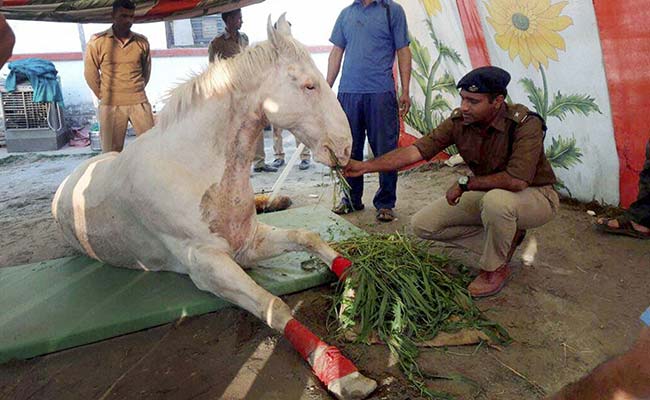 Shaktiman, the 13-year-old horse, has been a prized trophy of the mounted police for 10 years.

So how do we stop such a dangerous chain of insensitivity and violence? By nipping it in the bud. I am reminded of a short story At Home by renowned Russian author Anton Chekhov. In the story, a seven-year-old boy starts smoking. His father tries in vain to dissuade him from this dreary habit by cajoling him, threatening him and even bribing him, but fails. Finally, he tells him a story about a king and his son, wherein the latter died due to smoking. This leaves a huge impression on the mind of the seven-year-old child and he quits smoking.

Thus, the impact of stories on the mind of children is enormous. Hence, children should be told stories of love and compassion. At home and in schools, they should be taught that "Love thy neighbour as thyself" also extends to animals. They need to be told stories of India's glorious past where we worshipped our rivers, mountains and animals. The earliest laws of conservation of animals date way back to the reign of Emperor Ashoka who banned killing and hunting of all animals in his kingdom. Images depicted in ancient Indian art and wall carvings, the notes and stories mentioned in Indian scriptures and fables like Panchatantraand Hitopadesha, all of these reflect the ethos of conservation and reverence for animals. These stories shall inspire children to treat animals with compassion and to raise their voice against any form of animal abuse.

In India, there exists rampant animal abuse - on roads, in houses, in shanties and even in trains. Examples of such abuse include overloaded bullocks who fall down from carrying heavy weight; slaughterhouses that execute animals cruelly after torturing them; poisoning of cats; factory farming of animals, cock, goat and bull fights; animal sacrifices in temples; races with cows and horses tied together and made to run for 10 kilometres; trucks that carry 50 cows and buffaloes jammed and crushed together so that half of them die on arrival; old animals thrown out of the streets; monkey dances - the list is endless. Some of these animal abuses such as the raping of animals such as dogs and cats are shocking and blood-curdling.

Such animal abuse can be tackled by having a dedicated police unit specialized to deal with animal issues.

The Netherlands is the first country in the world to have a dedicated (500-strong) police force for the  protection of animals, a move made by the government with the insistence of The Party for the Animals. By law, we should have the Society for the Prevention of Cruelty to Animals (SPCAs) in every district. However, the SPCA exists only in Delhi, where inspectors themselves collude with the violators, and thus the animal abuse goes unchecked. .

Acts of violence against animals that are checked now will prevent future crimes against humanity. It's time we took a stand now for the victims of tomorrow.

(Poonam Mahajan is a BJP MP from Mumbai)