The Bengaluru Violence Surprised With Its Scale And Agility

You know how it happens usually. A political party or a trade union calls for a "bandh" or a general strike, announcing the date well in advance. Vehicles and some shops open in the early morning, before shutting down to "observe the bandh" around 9 am. They stay shut - or are forced to stay shut by the party or union musclemen - until the late afternoon, before cautiously opening in the evening. Parents worry about their children's schools, some children worry about their classes (while others secretly enjoy the prospect of a holiday), public buses stay off the roads and auto-rickshaws do some cautious business. At least one public bus is vandalised - this is part of the "bandh routine" - and sometimes set on fire. It's a familiar drama. Most people know how it plays out.

What happened in Bengaluru this week, though, is different. On Monday, without warning, thousands of garment workers assembled near the city's garment hubs, blocked highway traffic for hours to protest against the union government's changes to the Employee's Provident Fund (EPF) withdrawal rules announced in this year's budget. It was unclear who their leader was, which organised group they were part of, or indeed what their specific demands were. While media reports suggested that they were incensed by the new EPF rule which delays withdrawal of the employers' contribution until after the worker turns 58, we did not hear a specific charter of demands. They did stone the local office of the EPFO to drive home their displeasure. 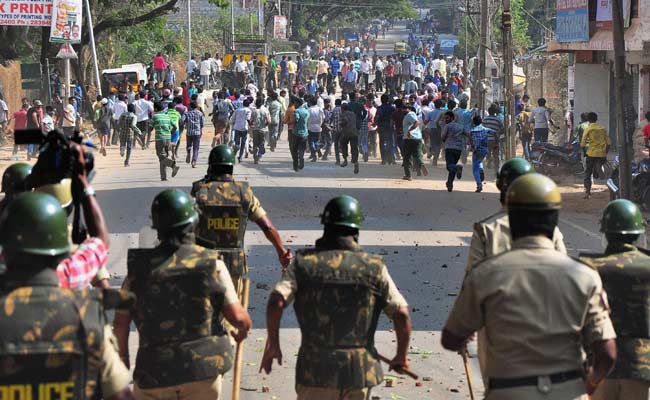 Thousands of garment workers in Bengaluru clashed with the police, angry with the government over a controversial new rule for provident funds, which has now been withdrawn (PTI photo)

Before Bengalurians dismissed this as a flash in the pan, the protests returned on Tuesday. They were bigger, they were more numerous and they were more violent. Protesters vandalised a police station and set fire to some impounded vehicles piled up in the premises. Some buses were set on fire, there were lathi charges and many police personnel and protesters were hurt. Almost all highways into the city were blocked. Miscreants took the opportunity to vandalise unrelated private enterprises. The campus of Biocon, one of the city's landmark biotechnology firms, was invaded and vandalised. As a senior police official noted, city police were prepared but were surprised by the scale of the protests and the violence.

Although trade unions and political parties have tried to sail their boats from the winds created by the protestors - by voicing their support and criticising the Modi government - it is likely that they are trying to derive mileage out of the situation they had little to do with. In response to public outcry, the Modi government has reversed its position. Cables in flames after being set afire by garment workers during a protest rally over the EPF withdrawal norm, in Bengaluru (PTI photo)

I will not bore you with a discussion on the merits of the EPF reform. What is interesting is the ability of garment industry workers - a large fraction of who are women - to mobilize quickly under the noses of the political parties, trade unions and law enforcement authorities.

We do not know all the facts yet, so what follows is an estimate based on current information. It is too early to tell how it happened, but to the extent that it is "leaderless", we should suspect that WhatsApp and SMS text messages have a role to play in bringing it about. As I've argued elsewhere, as the use of smartphones and social media gets widespread, people can mobilise faster, while drawing little attention until they are all on the streets. The Bengaluru garment workers might just be the latest demonstration of the politics of "radically networked societies". 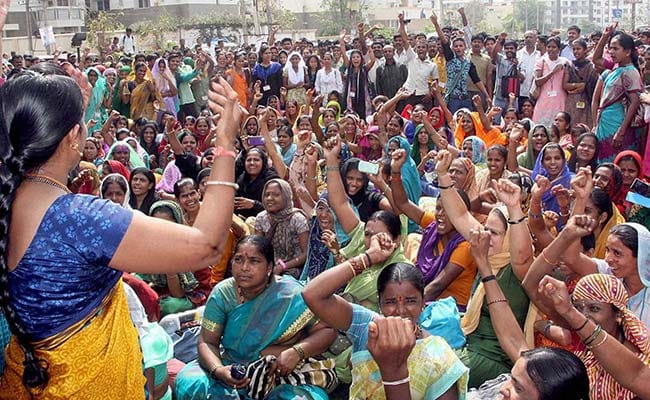 The protesters also blocked traffic on the highway, causing five-hour jams in the IT city (PTI photo)

Bangalore police are leaders in India on the use of social media for policing. They were active on Twitter, feeding regular and authoritative updates on the protests and traffic conditions. This allowed them to put accurate information into the public domain and squelch the rumour-mongering that might otherwise have taken place. However, to the extent that the protests were organised using closed groups like WhatsApp, they are likely to have little prior knowledge of the expected scale of the incidents. As the authorities are discovering even in the Kashmir Valley, closed private messaging groups present police with a hard challenge.

Those given to traditional thinking will smell a political conspiracy and credit this or that party with cleverly manipulating this incident. In my view though, this came from the workers directly and was made possible by an interplay between technological and human networks. IT and biotech workers are not the only denizens of Electronics City: employees of traditional industries, empowered by internet-connected smartphones live and work in the same place. Good political leadership can turn this into a force for greater democratisation, disintermediation and voice. Cynical leadership, on the other hand, can leave us with more blocked highways, burnt buses and vandalised buildings.

(Nitin Pai is director of the Takshashila Institution, a think tank and school of public policy. These are his personal views.)