Fifteen astrologers have spoken (reportedly) and the stars are finally aligned for JP Nadda to take over as BJP president from Amit Shah, the most successful holder of that office in the party's history.

Shah, called ".303" (after the famous rifle) by his team will hand over charge to Nadda on January 20. The reverential reference is to the 303 seats the BJP secured in the Lok Sabha in the election last year.

Significantly, Nadda will be in charge when the results of the Delhi election are announced on February 11. The BJP is not expecting to defeat incumbent Arvind Kejriwal and his Aam Aadmi Party.

So why has Shah, accepted as the BJP's most powerful president ever, decided to cede his enormous powers, at least on paper? Party sources say there are two main reasons: a renewed push for the contentious Citizenship Amendment Act (CAA) which has been approved and advocated by the entire Sangh, especially the RSS. Shah will be the face of the CAA offensive. So as Home Minister, he now addresses rallies all across the country on the CAA issue as the government doubles down on the contentious new law. Rajnath Singh, Smriti Irani and Nitin Gadkari will also address "awareness rallies" which the BJP has meticulously charted out across the country with a special push in West Bengal, Assam and Maharashtra. 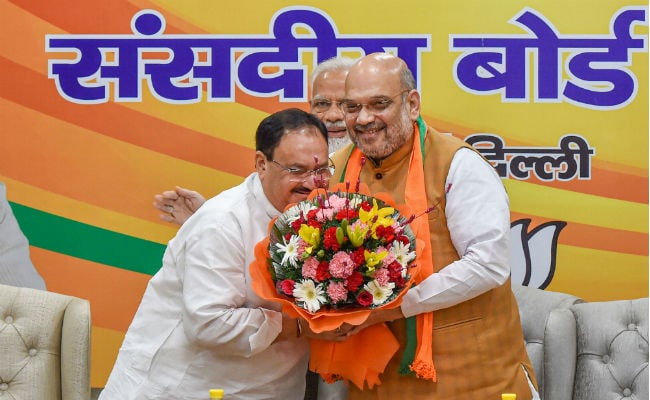 The RSS, in its first meeting this year held from 5 to 7 January in Indore and attended by Sangh chief Mohan Bhagwat and deputy Bhaiyyaji Joshi, has told the BJP to move ahead full steam on the CAA. After the conclave, Bhagwat had a telephone conversation with both Shah and Prime Minister Narendra Modi and said the RSS would ensure its cadre fully support the CAA and fan out across the country to "remove misconceptions on the Act".

Authoritative sources say that a similar outreach was planned and conducted for the Ram Mandir issue in anticipation of a favourable judgement from the Supreme Court. A similar program though with limited success and visibility was deployed for the Modi government's repeal of Article 370 (removal of special status) and whittling down the state to a union territory.

Both were core issues at the heart of the Sangh's Hindu l-first agenda. Sangh sources feel that while the CAA is completely in line with Sangh ideology, the government and the BJP faltered in clear and appealing communication and messaging, the absence of which has delivered widespread protests.

Now Shah and Nadda will do a dual push for "Mission CAA" with the RSS as a force multiplier.

Nadda is part of Shah's core team and is considered self-effacing enough not to even try and compete with the Modi-Shah duo who will still call all the shots. Shah will remain in charge of the strategy for the critical West Bengal elections due in 2021 and is expected to make a record number of visits to the state. "Don't be surprised if you see him there every Saturday. "We aim to give Mamata a very tough fight. Winning the West Bengal elections is his dream," said a BJP General Secretary to me.

Shah is so integral to the Nadda scheme of things that there is currently a debate about his room and name plate. Nadda wants to keep them as they are now. The final decision will unsurprisingly be taken by Shah.

With taking off his training wheels (he was named Working President in June last year), not a lot will change for the way the party is run. Shah, as Home Minister and the face of CAA, has a lot on his plate. But Nadda will cc him on everything to ensure that the current protocol and decision-making remains as is.

Apart from the daunting task of popularising CAA, Shah has to ensure at least a semblance of normality is brought to Kashmir. Expect aggressive moves - his power has been greatly enriched by going on the offensive on high-stake issues.

What Appears To Have Cost Trump The Election - by Rajmohan Gandhi