Modi Win Proves An India Unapologetic Of Its Roots And Culture

The verdict of 2019 was indeed a coming-of-age general election where people of this nation voted to keep a government in power than otherwise. Those who have been shell shocked with these results are the ones who refused to acknowledge the wave of change around them. Narendra Modi's electoral victory is a combination of many facets: national security, economic robustness, 'sarvodaya' through 'antodaya' (empowering the last man in the social pyramid). There was also a profound undercurrent among the people; especially the subaltern, who collectively not only rejected the political patronage in the name of caste, creed and religion, but also consciously endorsed their pride in our cultural and civilizational roots.

In 2014, 'The Guardian' while writing about Narendra Modi's electoral win in its editorial wrote that the 'British have finally left India', underlining the nationalist dynamism present in the incumbent leadership. In such a case, Modi's 2019 win can be counted as a vote towards shedding that colonised mindset which had continued to dominate the intellect and every sphere of governance and policy-making, post-independence. The academic ecosystem which nurtured an apologetic approach towards our rich cultural, spiritual and philosophical heritage has been questioned upfront in the last five years. Television debates, virtual platforms, micro-blogging sites were flooded with inquisitive queries followed by documented historical, archaeological facts exposing many fallacies which till now were taken as facts in public discourses. 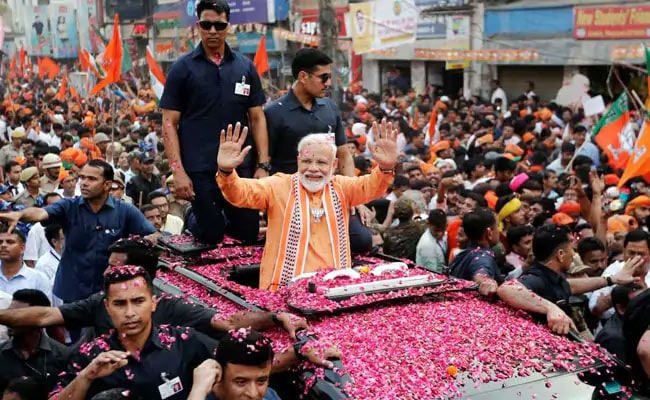 The BJP scored 303 seats in the 543-member Lok Sabha in the national election and along with its allies, won a remarkable tally of 353

Dynasty has for long dominated the political environment of India. Along with it, the deadly mix of nepotism, a feudal mindset, sycophancy and corruption fostered a culture which created pockets of individuals and family-centric dominance in political parties which have been running as enterprises, devoid of ideological adherence. This hole in our democracy has been finally plugged, overcoming social engineering, caste alliances and appeasement of minorities in the garb of the most thrusted word in the social, political discourse of the last five years: 'secular'.

Ownership over the word 'secular' was the most fiercely contested by those who for long had imposed themselves as its custodians. Their phony citadels of liberalism slowly fell apart due to an ideological vacuum and total disconnect with the indigenous thought process of this nation which has been Hindu. Secular has been woven with the consciousness of this land since time immemorial due to its Hindu roots. The timeline of our cultural history shows a continual embracing of various forms of worship: from the first mosque 'Cheraman' built in Kerala on land donated by a Hindu king in the 7th century to a recent donation for burial land by a Hindu family, DROP in Lakhimpur in Assam. Hindu is the only ordination which has been a culture, civilisation and a mode of worship. Theocracy has never been a part of Indian culture or discourse, yet an orchestrated fear has been built systematically by the select section of the 'secularism is in danger' brigade. This brigade has tried to perceive this as a threat to our secular fabric, not realizing that 'Indian' has always been identified with 'Hindu culture'.

However, after 2014, this brigade, which has been largely dominated by the political aristocracy and ruling elites found their intellect being questioned by those who had never been to Ivy League colleges and were educated largely in vernacular languages. After 2019, this brigade will become redundant; their sense of entitlement is passé. The very fact that those at the helm of the affairs in our parliamentary democracy have lived a commoner's life resonates with the people of this nation. Mahatma Gandhi's Hind Swaraj, where politics was for service, finds similarity with this governance. The voice of the people embodies an awakening for their roots. People this time voted for restoring their identity, sense of dignity and pride. Narendra Modi represents all that.

(Dr. Geeta Bhatt is an Associate Professor and former Member of the Academic Council, University of Delhi.)