In parliament, with a stunned Sonia Gandhi looking on, Mulayam Singh Yadav declared Narendra Modi his valentine, professing that he hopes Modi returns as Prime Minister.

Modi did not throw away his shot, adroitly saying that a lot of work remained (for him to complete with a second term)and declaring his gratitude for "Mulayam Singh Yadav's blessings".

The beautifully choreographed maneuver between the PM and a supposed leader of the opposition was piercing. Mulayam is the father of Samajwadi Party chief Akhilesh Yadav who has entered into a historic alliance with fellow regional heavyweight, BSP leader Mayawati; the partnership between them places their famous rivalry firmly in the rearview mirror to stop Modi from winning the bellwether state of Uttar Pradesh. 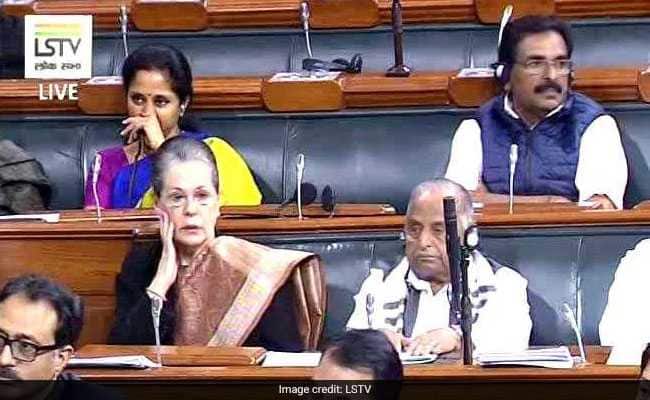 PM Modi said he was grateful to have Mulayam Singh's blessings

Mulayam's "only you" serenading of Modi proves that family drama never gets old in Indian politics. He's still sore over being sidelined by his young son within their party in 2017. Since then, the BJP and its chief, Amit Shah, have been taking advantage of Mulayam's bruised ego to encourage his covert tactics against Akhilesh. Meanwhile, Mulayam's brother, Shivpal, a firm plotter against Akhilesh, has launched his own party in Uttar Pradesh.

Amit Shah, addressing the BJP's social media warriors earlier this year, reportedly said, "It does not matter whether it is true or false, just make it viral. A WhatsApp forward that said that Mulayam Singh was slapped by his son was viral in UP during the assembly elections."

In three crucial by-elections recently, the Akhilesh- Mayawati combo defeated the BJP in precincts where it was seen as invincible. That has encouraged the BJP to leverage Shivpal Yadav and the meddler-par-excellence of Indian politics, Amar Singh, to deepen the fissures in the Yadav family.

A source close to Akhilesh Yadav explains that his father is unwell and has lots of "senior moments". Sure enough, last night, Mulayam Singh Yadav emerged from parliament and told TV crews about his praise for Modi, "I don't think I said this". Mulayam Singh seems to be torn between his brother Shivpal Yadav who has floated a new party and son. Yadav also bears historic enemy Mayawati a huge grudge and feels that the OBCs (which are his party's vote bank) and the Dalits (who are Mayawati's loyalists) will never vote together. Sources close to Akhilesh Yadav say that he has been extremely patient with his father and has repeatedly emphasized to "Neta-ji" as he is called the victory that he managed in the Phulpur, Kairana and Gorakhpur by-elections in partnership with Mayawati.

But Mulayam's talking up of Modi had one immediate effect: it concentrated the eternally bickering lot of opposition leaders into a new attempt at unity. At a dinner meeting held at NCP Chief Sharad Pawar's home last night, they decided that a pre-poll alliance was the need of the hour and entrusted Rahul Gandhi will drafting a common minimum programme. The dinner was organized after a large opposition rally hosted by the Aam Admi Party which was attended by Mamata Banerjee, Farooq Abdullah, Chandrababu Naidu and others. Importantly, the Congress sent a rep to the rally. More importantly, the dinner saw Arvind Kejriwal and Rahul Gandhi in joint attendance, raising expectations of a possible and crucial alliance between their parties in Delhi.

A senior leader present at the dinner told me, "Ram Mandir and Neta-ji's hurt: how many times does the BJP think it can cash this cheque? This time both will bounce in UP."

But the opposition's fake-it-till-you-make-it unity isn't entirely sustainable, either. For example, Mamata Banerjee was furious yesterday with a Congressman's withering attack on her party in parliament - and told Sonia Gandhi as much. "We will not forget this," she warned. In many ways, the BJP and Amit Shah may have to work far less than they should to divide the opposition.