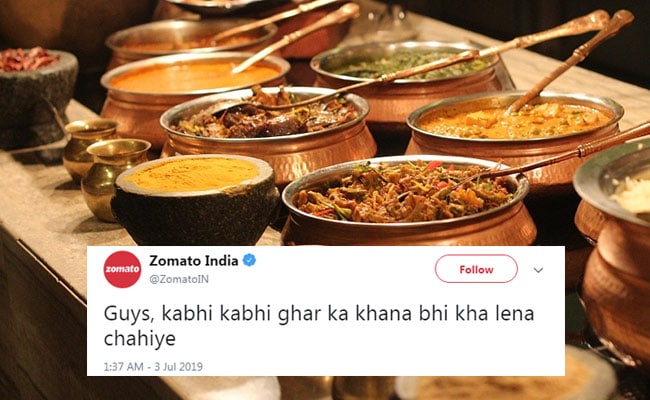 A funny tweet from Zomato has triggered a flood of responses that has netizens in splits. On Wednesday, food delivery platform Zomato shared an amusing tweet, asking customers to eat home-cooked food for a change. That bit of advice, coming from a food delivery app, left people chuckling - and also prompted other brands to copy the tweet.

The funny tweet, which has been 'liked' over 18,000 times, led to a flurry of responses from other brands and companies.

"Guys, kabhi kabhi raat ke 3 baje, phone side pe rakh ke jaana chahiye (Sometimes you should keep your phone aside at 3 am and sleep)" said the official account of YouTube India.

Amazon Prime, on the other hand, asked people to watch something on cable for a change

MobiKwik asked people to stand in line and pay their bills, rather than through them

While Faasos asked people to cook for a change, rather than ordering in

But Zomato managed to have the last word - and the last laugh. Collecting all the responses in one screenshot, they asked everyone else to think of their own tweets.

The witty tweets from Zomato have been widely appreciated on the microblogging website. Let us know what you think of them using the comments section below.

Viral Video: Mother Tricks Child Into Recording His Own Reaction As She Dances