Zomato said the ads were conceptualised six months ago, which was "long before any social media chatter around gig worker payouts/ working conditions." 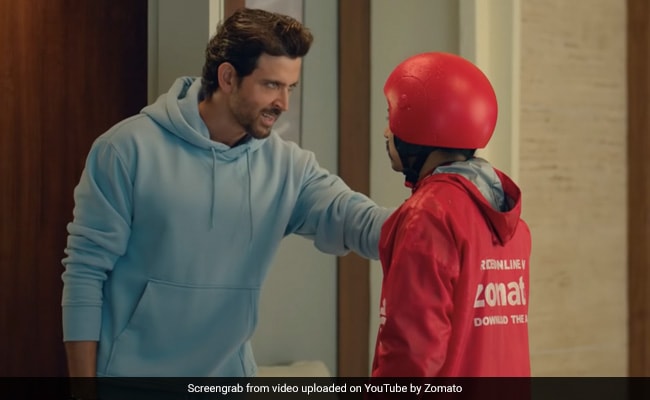 Zomato has responded to the negative feedback that the company's latest advertisements, featuring Hrithik Roshan and Katrina Kaif, have received on social media. The food delivery aggregator released a statement addressing some of the issues that viewers had with the adverts.

The Katrina ad plays out along similar lines - except this time, the actress asks the Zomato delivery partner to wait for a piece of birthday cake, which he has to forgo because, once again, his phone pings with a notification for another food order to be delivered.

The ads were slammed on social media for being tone-deaf in a day and age where the unfair treatment of gig workers has come under increased scrutiny. On Twitter, several people pointed out that the adverts did nothing more than suggest that Zomato delivery partners do not have a minute to rest in between delivering orders, while others said the company would rather spend money on celebrity ads than pay their delivery partners fair wages.

Responding to the criticism, Zomato said the ads were conceptualised six months ago, which was "long before any social media chatter around gig worker payouts/ working conditions."

The company further said the goal of these advertisements was to make delivery partners the hero of the ads, highlight that we should talk respectfully to delivery partners, raise the level of dignity associated with a delivery partner's job and reiterate that every customer is a star for the company.

"We believe that our ads are well-intentioned, but were unfortunately misinterpreted by some people," wrote Zomato.

The other side of the story... pic.twitter.com/hNRj6TpK1X

In its statement, the company said that it had been noticing the social media chatter around gig workers and their unfair working conditions. In the last few months, there have been increased demands that Zomato and other delivery platforms take steps to safeguard the interests of their delivery associates, who have complained of long working hours, unrealistic delivery timelines and unfair wages.

"We understand that you expect more and better from us," said Zomato.

"Our delivery partner Net Promoter Score has increased from -10% to 28% (and continues to rise). We will also, very soon, publish a blog post explaining why we think our delivery partners are fairly compensated for the work/time that they put in," Zomato concluded.