"You Got Free Ice Cream": Mom Refuses To Pay Babysitter, Abuses Her In Viral Post

"I wasn't aware payment was involved. You got free ice cream and a day of fun... I'm sorry for the misinterpretation." 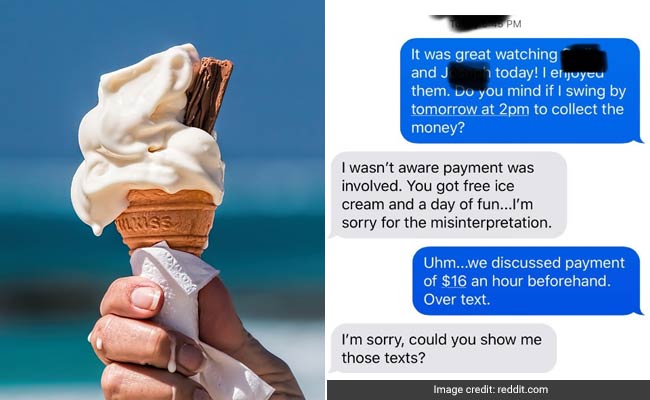 A screenshot of a conversation going viral shows a mom refusing to pay her babysitter.

A text exchange between a mother and a babysitter she hired is going viral on the Internet right now, and it has netizens furious. A screenshot of the conversation was posted on Reddit this Sunday by Redditor VortexThing, whose sister was refused payment after an 8-hour babysitting shift by a mother who claimed that "free ice cream and a day of fun" with her kids was compensation enough.

The exchange begins with the babysitter asking if she could collect her payment the next day, to which the mother responds by saying that she wasn't "aware" that payment was involved for the babysitting.

"I wasn't aware payment was involved. You got free ice cream and a day of fun... I'm sorry for the misinterpretation."

On being told that they had discussed a payment of $16 an hour beforehand, the mother claims that she deletes her messages often - and goes on to call the sitter "stuck up".

After the babysitter persists, the mom first tries to bring the amount down to $20 from the $128 she owed, before abusing the sitter and blocking her.

You can read the full exchange below:

Shared on the subreddit Choosing Beggars, the post has collected over 71,000 'upvotes' and over 4,500 outraged comments.

"'I delete my messages often' OOH OKAY THEN THE SCREENSHOT I JUST SHOWED YOU IS INVALID. how dumb are these people," writes one commenter. "You could always do small claims court. Make her pay for all the court fees," says another.

"Could you please update us if your sister goes to small claims court? We want justice!" a third writes.

While we don't know for sure whether the babysitter finally got her payment or not, original poster VortexThing posted an update two days later, saying that his sister was able to get in touch with the mother and her husband, who agreed to pay her after she threatened legal action.

A similar exchange between a mother and a swimming teacher went viral a few days ago on Reddit, when the mother demanded that the teacher collect money from other parents and hand it over to her.