"You Complete Me, Seema," Writes Piyush Goyal For Wife On 30th Wedding Anniversary

The Union Minister has shared the images on Koo app. 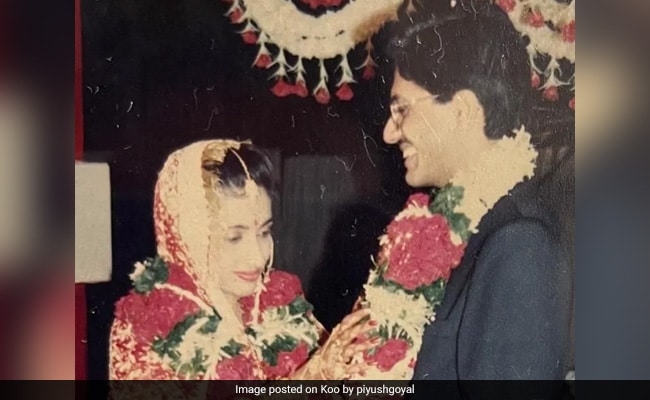 Piyush Goyal shared a throwback from his wedding 30 years ago

It's not often that ministers celebrate their personal life in public. So when they do, it attracts interest and curiosity. This time, we have Union Minister Piyush Goyal, who has shared two images to wish his wife Seema Goyal on their 30th wedding anniversary. "You complete Me, Seema," the Commerce and Industry Minister said in his post. One of the photos uploaded by Mr Goyal on the Koo App was of their wedding. The other one appeared to be more recent.

A number of people have congratulated Mr Goyal and his wife on completing 30 years together and wished them for the future.

"Wishing you a happy married anniversary sir, lots of success to you as a person and hopefully we as a nation," said another.

Koo App
Wishing you a happy married anniversary sir , lots of sucess to you as a person and hopefully we as a nation- Parveen Arya (@arya_8216) 1 Dec 2021

Earlier, Minister for Housing and Urban Affairs Hardeep Puri had shared photos on Instagram with his wife against the backdrop of majestic Mussoorie hills. Mr Puri said they met in the hill station for the first time and then decided to marry. "Jab we met again in Mussoorie at the launch of the Foundational Course of the National Academy of Administration, Mussoorie. That's where we first met, fell in love and decided to spend our lives together,” he captioned the post.

Ms Puri is a former Assistant Secretary-General at the United Nations and Deputy Executive Director of UN Women.

Woman Sues Mom's Doctor For Allowing Her To Be Born, Wins Millions