Officials hope that 'robocops' will become an integral part of the Dubai police force by 2030. 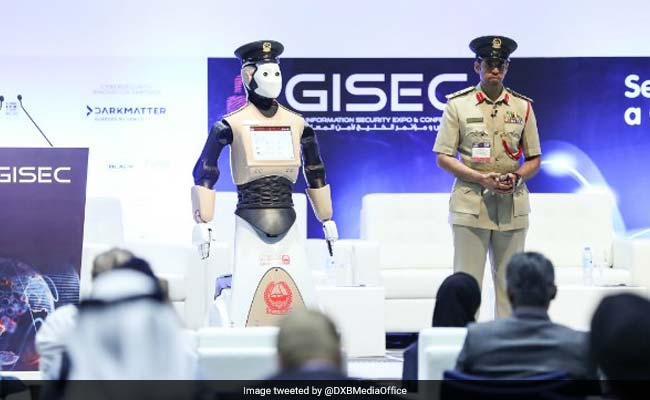 The "world's first operational robocop" was unveiled in Dubai

New Delhi: The "world's first operational robocop" will soon be patrolling Dubai's streets. On Monday, the robot was unveiled at the Gulf Information Security Expo and Conference currently taking place in Dubai. Officials say that by 2030, they hope 25 per cent of Dubai's total police force will comprise of robots, including in administrative or clerical roles.

So proud of our Brigd. Khalid Al Razooqi - one of the most advanced #tech leaders of #Dubai#RoboCop@DubaiPoliceHQpic.twitter.com/U3gLCNHpBS

Robocop, the artificial intelligence-powered robot, is about 5 feet and 5 inches tall and weights about 100 kilograms. It has a battery life of about eight hours.

According to Gulf News, the robot is equipped with an "emotion detector" that helps it determine whether you are happy or sad and alter its own expression accordingly. It can also shake hands and offer a military salute.

It can use its facial recognition software to help police officers identify and catch offenders, as well as broadcast live video feeds, reports the Khaleej Times.

The robot has a built-in tablet so people can use to report crimes or pay off fines or even send and receive messages from police headquarters.

The robocop can "chat" in Arabic or English. The National reports that languages such as Russian, Chinese, French and Spanish will soon be added to its vocabulary.

Developed by Spain-based PAL Robotics, the robot reportedly has a number of skills added on by Google and IBM's supercomputer Watson.

Say cheese! Check out the amazing Robocop over at the @DubaiPoliceHQ stand! #GISEC2017pic.twitter.com/5exGfSkHC4

"We're not going to fire our police officers by replacing them with this tool but with the number of people in Dubai increasing, we want to relocate police officers so they work in the right areas and can concentrate on providing a safe city," Brig Khalid Al Razooqi, Dubai Police's Director General of Smart Services, tells The National.

According to the Dubai police, there are even plans to build the world's largest robot - which can run at 80 kilometres per hour. That robot will reportedly be manoeuvred by a police officer seated in a cabin inside.

The robocop's first job posting will be at malls and tourist hot spots around Dubai. It officially reports for duty on Wednesday. Click for more trending news